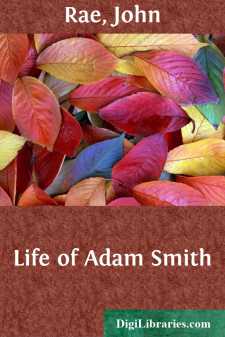 Adam Smith was born at Kirkcaldy, in the county of Fife, Scotland, on the 5th of June 1723. He was the son of Adam Smith, Writer to the Signet, Judge Advocate for Scotland and Comptroller of the Customs in the Kirkcaldy district, by Margaret, daughter of John Douglas of Strathendry, a considerable landed proprietor in the same county.

Of his father little is known. He was a native of Aberdeen, and his people must have been in a position to make interest in influential quarters, for we find him immediately after his admission to the Society of Writers to the Signet in 1707, appointed to the newly-established office of Judge Advocate for Scotland, and in the following year to the post of Private Secretary to the Scotch Minister, the Earl of Loudon. When he lost this post in consequence of Lord Loudon's retirement from office in 1713, he was provided for with the Comptrollership of Customs at Kirkcaldy, which he continued to hold, along with the Judge Advocateship, till his premature death in 1723. The Earl of Loudon having been a zealous Whig and Presbyterian, it is perhaps legitimate to infer that his secretary must have been the same, and from the public appointments he held we may further gather that he was a man of parts. The office of Judge Advocate for Scotland, which was founded at the Union, and which he was the first to fill, was a position of considerable responsibility, and was occupied after him by men, some of them of great distinction. Alexander Fraser Tytler, the historian, for example, was Judge Advocate till he went to the bench as Lord Woodhouselee. The Judge Advocate was clerk and legal adviser to the Courts Martial, but as military trials were not frequent in Scotland, the duties of this office took up but a minor share of the elder Smith's time. His chief business, at least for the last ten years of his life, was his work in the Custom-house, for though he was bred a Writer to the Signet—that is, a solicitor privileged to practise before the Supreme Court—he never seems to have actually practised that profession. A local collectorship or controllership of the Customs was in itself a more important administrative office at that period, when duties were levied on twelve hundred articles, than it is now, when duties are levied on twelve only, and it was much sought after for the younger, or even the elder, sons of the gentry. The very place held by Smith's father at Kirkcaldy was held for many years after his day by a Scotch baronet, Sir Michael Balfour. The salary was not high. Adam Smith began in 1713 with £30 a year, and had only £40 when he died in 1723, but then the perquisites of those offices in the Customs were usually twice or thrice the salary, as we know from the Wealth of Nations itself (Book V. chap. ii.). Smith had a cousin, a third Adam Smith, who was in 1754 Collector of Customs at Alloa with a salary of £60 a year, and who writes his cousin, in connection with a negotiation the latter was conducting on behalf of a friend for the purchase of the office, that the place was worth £200 a year, and that he would not sell it for less than ten years' purchase.

Smith's father died in the spring of 1723, a few months before his famous son was born....