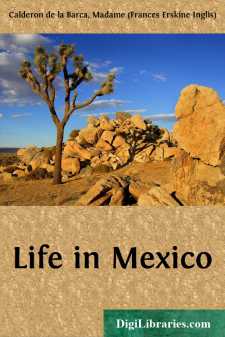 In the year 1843, two new books took the American public by storm: one was Prescott's History of the Conquest of Mexico, and the other Life in Mexico by Madame Calderon de la Barca. William Hickling Prescott was already known as an able historian on account of his scholarly Reign of Ferdinand and Isabella of Spain which had appeared four years before and elicited praise from all quarters; but his new work outran the former in that the author had succeeded in depicting one of the most stirring episodes of history with the grandeur of an epic and the interest of a novel.

It was therefore natural that a book with Prescott's endorsement should be favourably received by the general public; but Life in Mexico immediately attained wide circulation on its own merits, and was received with unbounded enthusiasm. Soon the slight veil that pretended to hide the author's name was drawn aside and Madame Calderon de la Barca became famous in literary and social circles.

Frances Erskine Inglis was born in Edinburgh in the year 1804. Her father, William Inglis, belonged to a distinguished Scottish family, related to the Earls of Buchan, and was a grandson of a gallant Colonel Gardiner who fell in the battle of Prestonpans, while her mother, a Miss Stern before her marriage, was a celebrated beauty of her time.

Fanny, as Frances was familiarly called, was still very young when her father found himself in financial difficulties and decided to retire with his family to Normandy where living was supposed to be cheaper. But William Inglis died a few years later, and his widow determined to settle in America. In the United States Mrs. Inglis established a private school first in Boston, later in Staten Island, and finally in Baltimore, and her daughter was a great help, for she immediately revealed herself as an excellent teacher. Besides, Fanny became a great friend of Ticknor, Lowell, Longfellow, and especially of Prescott, who thought her "ever lively and spirituelle."

In 1836 a Special Diplomatic Mission from Spain arrived at Washington, and at its head came Don Angel Calderon de la Barca, a gentleman of high social standing and an accomplished man of letters, who, naturally enough, soon established literary relations with William Prescott, then at work on his History of the Reign of Ferdinand and Isabella. In this connection he became acquainted with many of Prescott's friends, the Inglis ladies among others, and the result was that he fell in love with the accomplished Fanny, and married her in 1838. Shortly afterwards Don Angel was appointed Isabel II's Minister to Mexico, the first Spanish Envoy to the young Republic that had formerly been the Kingdom of New Spain. The newly married couple, accordingly, started on their journey to Mexico, which was destined to be a long one, even for those days, for they left New York on October 27th and did not reach their destination until the 26th of the following December.

Calderon's mission to Mexico lasted somewhat more than two years, during which time he and his wife, says Prescott, "lived much at their ease," and "were regaled en prince." In spite of Don Angel's delicate diplomatic duties and her own frequent social engagements and strenuous excursions, Fanny Inglis Calderon found time to write almost daily letters, most of them of considerable length, to relatives and friends....