Life History of the Kangaroo Rat 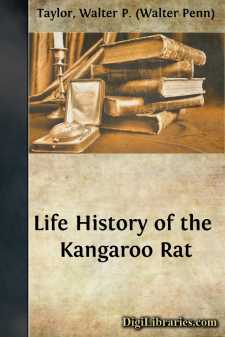 As the serious character of the depredations by harmful rodents is recognized, State, Federal, and private expenditures for their control increase year by year. These depredations include not only the attacks by introduced rats and mice on food materials stored in granaries, warehouses, commercial establishments, docks, and private houses, but also, particularly in the Western States, the ravages of several groups of native ground squirrels and other noxious rodents in grain and certain other field crops. Nor is this all, for it has been found that such rodents as prairie dogs, pocket gophers, marmots, ground squirrels, and rabbits take appreciable and serious toll of the forage on the open grazing range; in fact, that they reduce the carrying capacity of the range to such an extent that expenditures for control measures are amply justified. Current estimates place the loss of goods due to rats and mice in warehouses and stores throughout the United States at no less than $200,000,000 annually, and damage to the carrying capacity of the open range and to cultivated crops generally by native rodents in the Western States at $300,000,000 additional; added together, we have an impressive total from depredations of rodents.

The distribution and life habits of rodents and the general consideration of their relation to agriculture, forestry, and grazing, with special reference to the carrying capacity of stock ranges, is a subject that has received attention for many years from the Biological Survey of the United States Department of Agriculture. As a result of the investigations conducted much has been learned concerning the economic status of most of the more important groups, and the knowledge already gained forms the basis of the extensive rodent-control work already in progress, and in which many States are cooperating with the bureau. If the work is to be prosecuted intelligently and the fullest measure of success achieved, it is essential that the consideration largely of groups as a whole be supplemented by more exhaustive treatment of the life histories of individual species and of their place in the biological complex. The present report is based upon investigations, chiefly in Arizona, of the life history, habits, and economic status of the banner-tailed kangaroo rat, Dipodomys spectabilis spectabilis Merriam ().

Some 18 years ago (in 1903) a tract of land 49.2 square miles in area on the Coronado National Forest near the Santa Rita Mountains, Pima County, southern Arizona, was closed to grazing by arrangement between the Forest Service and the Agricultural Experiment Station of the University of Arizona. Since that time another small tract of nearly a section has been inclosed (Griffiths, 1910, 7). This total area of approximately 50 square miles is known as the United States Range Reserve, and is being devoted to a study of grazing conditions in this section and to working out the best methods of administering the range ().

For some years an intensive study of the forage and other vegetative conditions of this area has been made, the permanent vegetation quadrat, as proposed by Dr. F. E. Clements (1905, 161-175), being largely utilized. During the autumn of 1917 representatives of the Carnegie Institution and the Arizona Agricultural Experiment Station visited the Reserve and were impressed with the evidence of rodent damage to the grass cover. The most conspicuous appearance of damage was noted about the habitations of the banner-tailed kangaroo rat (Dipodomys spectabilis spectabilis Merriam), although it was observed also that jack rabbits of two species (Lepus californicus eremicus Allen and L....