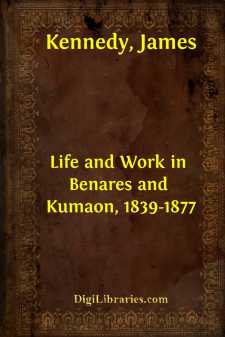 The history of this volume can be given in a few words. Months ago I said to a beloved relative that during the greater part of my life I had more to do than I could well accomplish, and that now, with health and strength in a measure restored, I sometimes thought I had not enough to do. He said: "Why not write the reminiscences of your Indian life?" The counsel struck me as good, and I have acted on it.

My theme has not the advantage of novelty: I cannot tell of a new country explored, and a new people brought within the knowledge of the world; but it has the advantage of greatness and variety. I am not aware that any book on Indian Missions has achieved signal success. I do not think, however, a single one has been written in vain. That must have been a singularly poor book on so great a subject which has not had something in it fitted to interest and inform readers. That must have been a very solitary, lonely missionary, who has had no friends ready to listen to what he has had to say. These books may have received little general attention; but here and there, as the result of their perusal, there has been a more intelligent apprehension of our work, deeper sympathy with us, and heartier support rendered to us. I have ventured to add a volume to those already published in the hope that it may do some good before it passes into the oblivion which necessarily awaits most of the productions of the press.

A glance at the contents of this volume will show it takes up a number of subjects, some of which are merely touched in most books on Missions, and others not at all. Reminiscences, especially when they spread over many years, and embrace great events, admit of very discursive treatment. They leave the writer unfettered to take up any subject within his wide scope which he may deem fitted to interest his readers. I have allowed myself the freedom thus afforded me. My aim has been to take my readers with me to our Indian home, to see us at our work, to hear us conversing with the people, to accompany us on our journeys, to surround them in thought with our surroundings, so that they may realize our position, trials, difficulties, and joys. I have throughout maintained the standpoint of one whose Indian life has been devoted to Mission work. My two spheres of labour—Benares during the greater part of my course, and Ranee Khet, in the Hill Province of Kumaon, in later years—have come in for extended remark.

My attention has not, however, been confined to Missions. I have endeavoured to write as one interested in everything which ought to interest a resident in the land. I have given some account of the climate, aspect of the country, condition and character of the people, changes which have taken place, modes of travelling, and the British Government. I have again and again travelled in the North-West, and some account of these journeys has been given. On one occasion I spent the greater part of two months in Ceylon, and to that beautiful island a chapter is devoted....