Life and Literature Over two thousand extracts from ancient and modern writers, and classified in alphabetical order 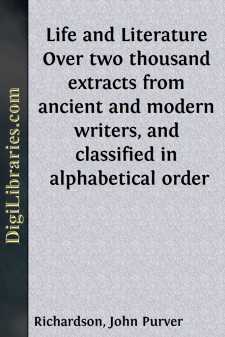 Abilities—No man's abilities are so remarkably shining, as not to stand in need of a proper opportunity, a patron, and even the praises of a friend, to recommend them to the notice of the world.

2 Absence, with all its pains,Is by this charming moment wip'd away. 3

Abuse is the weapon of the vulgar.

It is told of Admiral Collingwood that on his travels he carried a bag of acorns, and dropped one wherever there seemed a likely spot for an oak to grow, that England might never lack ships.

Acquaintances—It is easy to make acquaintances, but sometimes difficult to shake them off, however irksome and unprofitable they are found, after we have once committed ourselves to them.

Many persons I once thought great, dwindle into very small dimensions, on a short acquaintance.

8 Speak out in acts, the time for wordsHas passed, and deeds alone suffice.

All may do what has by Man been done.

An act, by which we make one friend, and one enemy, is a losing game; because revenge is a much stronger principle than gratitude.

All the world practices the art of acting.

Do what you can, when you cannot do what you would.

A good action performed in this world receives its recompense in the other, just as water poured at the root of a tree appears again above in fruit and flower.

If the world were to see our real motives, we should be ashamed of some of our best actions.

Our actions are our own; their consequences belong to Heaven.

What thou intendest to do, speak not of, before thou doest it.

There is as much eloquence in the tone of voice, in the eyes, and in the air of a speaker, as in his choice of words.

Actions—What I must do, is all that concerns me, and not what people think.

20 ON LEAVING, AFTER A SHORT VISIT. She gazed as I slowly withdrew;My path I could hardly discern;So sweetly she bade me "adieu,"I thought that she bade me return.

Adversity is sometimes hard upon a man; but for one man who can stand prosperity, there are a hundred that will stand adversity.

Adversity does not take from us our true friends; it only disperses those who pretended to be so.

Adversity has the effect of eliciting talents, which, in prosperous circumstances, would have lain dormant.

He who never was acquainted with adversity, has seen the world but on one side, and is ignorant of half the scenes of nature.

In prosperity the proud man knows nobody; in adversity nobody knows him.

The finest friendships have been formed in mutual adversity....