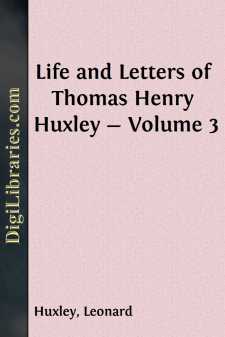 [The first half of 1887, like that of the preceding year, was chequered by constant returns of ill-health.] "As one gets older," [he writes in a New Year's letter to Sir J. Donnelly, "hopes for oneself get more moderate, and I shall be content if next year is no worse than the last. Blessed are the poor in spirit!" [The good effects of the visit to Arolla had not outlasted the winter, and from the end of February he was obliged to alternate between London and the Isle of Wight.

Nevertheless, he managed to attend to a good deal of business in the intervals between his periodic flights to the country, for he continued to serve on the Royal Society Council, to do some of the examining work at South Kensington, and to fight for the establishment of adequate Technical Education in England. He attended the Senate and various committees of the London University and of the Marine Biological Association.

Several letters refer to the proposal—it was the Jubilee year—to commemorate the occasion by the establishment of the Imperial Institute. To this he gladly gave his support; not indeed to the merely social side; but in the opportunity of organising the practical applications of science to industry he saw the key to success in the industrial war of the future. Seconding the resolution proposed by Lord Rothschild at the Mansion House meeting on January 12, he spoke of the relation of industry to science—the two great developments of this century. Formerly practical men looked askance at science, "but within the last thirty years, more particularly," continues the report in "Nature" (volume 33 page 265) "that state of things had entirely changed. There began in the first place a slight flirtation between science and industry, and that flirtation had grown into an intimacy, he must almost say courtship, until those who watched the signs of the times saw that it was high time that the young people married and set up an establishment for themselves. This great scheme, from his point of view, was the public and ceremonial marriage of science and industry."

Proceeding to speak of the contrast between militarism and industrialism, he asked whether, after all, modern industry was not war under the forms of peace. The difference was the difference between modern and ancient war, consisting in the use of scientific weapons, of organisation and information. The country, he concluded, had dropped astern in the race for want of special education which was obtained elsewhere by the artisan. The only possible chance for keeping the industry of England at the head of the world was through organisation.

Writing on January 18, to Mr. Herbert Spencer, who had sent him some proofs of his Autobiography to look through, he says:—]

I see that your proofs have been in my hands longer than I thought for.But you may have seen that I have been "starring" at the Mansion House.

This was not exactly one of those bits of over-easiness to pressure with which you reproach me—but the resultant of a composition of pressures, one of which was the conviction that the "Institute" might be made into something very useful and greatly wanted—if only the projectors could be made to believe that they had always intended to do that which your humble servant wants done—that is the establishment of a sort of Royal Society for the improvement of industrial knowledge and an industrial university—by voluntary association....