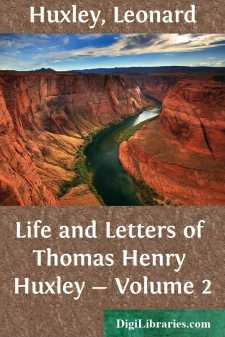 [With the year 1870 comes another turning-point in Huxley's career. From his return to England in 1850 till 1854 he had endured four years of hard struggle, of hope deferred; his reputation as a zoologist had been established before his arrival, and was more than confirmed by his personal energy and power. When at length settled in the professorship at Jermyn Street, he was so far from thinking himself more than a beginner who had learned to work in one corner of the field of knowledge, still needing deep research into all kindred subjects in order to know the true bearings of his own little portion, that he treated the next six years simply as years of further apprenticeship. Under the suggestive power of the "Origin of Species" all these scattered studies fell suddenly into due rank and order; the philosophic unity he had so long been seeking inspired his thought with tenfold vigour, and the battle at Oxford in defence of the new hypothesis first brought him before the public eye as one who not only had the courage of his convictions when attacked, but could, and more, would, carry the war effectively into the enemy's country. And for the next ten years he was commonly identified with the championship of the most unpopular view of the time; a fighter, an assailant of long-established fallacies, he was too often considered a mere iconoclast, a subverter of every other well-rooted institution, theological, educational, or moral.

It is difficult now to realise with what feelings he was regarded in the average respectable household in the sixties and early seventies. His name was anathema; he was a terrible example of intellectual gravity beyond redemption, a man with opinions such as cannot be held "without grave personal sin on his part" (as was once said of Mill by W.G. Ward), the representative in his single person of rationalism, materialism, atheism, or if there be any more abhorrent "ism"—in token of which as late as 1892 an absurd zealot at the headquarters of the Salvation Army crowned an abusive letter to him at Eastbourne by the statement, "I hear you have a local reputation as a Bradlaughite."

But now official life began to lay closer hold upon him. He came forward also as a leader in the struggle for educational reform, seeking not only to perfect his own biological teaching, but to show, in theory and practice, how scientific training might be introduced into the general system of education. He was more than once asked to stand for Parliament, but refused, thinking he could do more useful work for his country outside.

The publication in 1870 of "Lay Sermons," the first of a series of similar volumes, served, by concentrating his moral and intellectual philosophy, to make his influence as a teacher of men more widely felt. The "active scepticism," whose conclusions many feared, was yet acknowledged as the quality of mind which had made him one of the clearest thinkers and safest scientific guides of his time, while his keen sense of right and wrong made the more reflective of those who opposed his conclusions hesitate long before expressing a doubt as to the good influence of his writings....