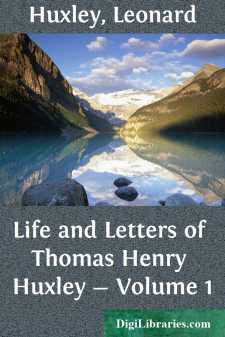 [In the year 1825 Ealing was as quiet a country village as could be found within a dozen miles of Hyde Park Corner. Here stood a large semi-public school, which had risen to the front rank in numbers and reputation under Dr. Nicholas, of Wadham College, Oxford, who in 1791 became the son-in-law and successor of the previous master.

The senior assistant-master in this school was George Huxley, a tall, dark, rather full-faced man, quick tempered, and distinguished, in his son's words, by "that glorious firmness which one's enemies called obstinacy." In the year 1810 he had married Rachel Withers; she bore five sons and three daughters, of whom one son and one daughter died in infancy; the seventh and youngest surviving child was Thomas Henry.

George Huxley, the master at Ealing, was the second son of Thomas Huxley and Margaret James, who were married at St. Michael's, Coventry, on September 8, 1773. This Thomas Huxley continued to live at Coventry until his death in January 1796, when he left behind him a large family and no very great wealth. The most notable item in the latter is the "capital Messuage, by me lately purchased of Mrs. Ann Thomas," which he directs to be sold to pay his debts—an inn, apparently, for the testator is described as a victualler. Family tradition tells that he came to Coventry from Lichfield, and if so, he and his sons after him exemplify the tendency to move south, which is to be observed in those of the same name who migrated from their original home in Cheshire. This home is represented to-day by a farm in the Wirral, about eight miles from Chester, called Huxley Hall. From this centre Huxleys spread to the neighbouring villages, such as Overton and Eccleston, Clotton and Duddon, Tattenhall and Wettenhall; others to Chester and Brindley near Nantwich. The southward movement carries some to the Welsh border, others into Shropshire. The Wettenhall family established themselves in the fourth generation at Rushall, and held property in Handsworth and Walsall; the Brindley family sent a branch to Macclesfield, whose representative, Samuel, must have been on the town council when the Young Pretender rode through on his way to Derby, for he was mayor in 1746; while at the end of the sixteenth century, George, the disinherited heir of Brindley, became a merchant in London, and purchased Wyre Hall at Edmonton, where his descendants lived for four generations, his grandson being knighted by Charles II in 1663.

But my father had no particular interest in tracing his early ancestry. "My own genealogical inquiries," he said, "have taken me so far back that I confess the later stages do not interest me." Towards the end of his life, however, my mother persuaded him to see what could be found out about Huxley Hall and the origin of the name. This proved to be from the manor of Huxley or Hodesleia, whereof one Swanus de Hockenhull was enfeoffed by the abbot and convent of St. Werburgh in the time of Richard I. Of the grandsons of this Swanus, the eldest kept the manor and name of Hockenhull (which is still extant in the Midlands); the younger ones took their name from the other fief....