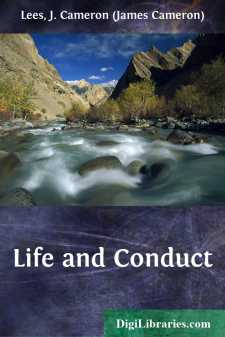 Everything in the practical conduct of life depends upon character.

What is character? What do we mean by it? As when we say such a man is a bad character, or a good character, or when we use the words, "I don't like the character of that man."

By character we mean what a man really is, at the back of all his actions and his reputation and the opinion the world has of him, in the very depth of his being, in the sight of God, "to whom all hearts are open, all desires known, and from whom no secrets are hid."

It is said of Burns, the poet, that walking along the streets of Edinburgh with a fashionable acquaintance, he saw a poorly-dressed peasant, whom he rushed up to and greeted as a familiar friend. His companion expressed his surprise that he could lower himself by speaking to one in so rustic a garb. "Fool!" said the poet, with flashing eye; "it was not the dress, the peasant's bonnet and hodden gray, I spoke to, but the man within—the man who beneath that bonnet has a head, and beneath that hodden gray a heart, better than a thousand such as yours." What the poet termed the "man within," what the Scripture calls the "hidden man of the heart," is character—the thing a man really is. Now, there are five things to be remembered about character.

I. Character is a growth.—As the man without grows, so the man within grows also—grows day by day either in beauty or in deformity. We are becoming, as the days and years pass on, what we shall be in our future earthly life, what we shall be when that life is ended. No one becomes what he is at once, whether what he is be good or bad. You may have seen in the winter-time an icicle forming under the eaves of a house. It grows, one drop at a time, until it is more than a foot long. If the water is clear, the icicle remains clear and sparkles in the sun; but if the water is muddy, the icicle looks dirty and its beauty is spoiled. So our characters are formed; one little thought or feeling at a time adds its influence. If these thoughts and feelings are pure and right, the character will be lovely and will sparkle with light; but if they are impure and evil, the character will be wretched and deformed.

Fairy tales tell us of palaces built up in a night by unseen hands, but those tales are not half so wonderful as what is going on in each of us. Day and night, summer and winter, a building is going up within us, behind the outer screen of our lives. The storeys of it are being silently fashioned: virtue is being added to faith, and to virtue is being added knowledge, and to knowledge is being added brotherly kindness, and to brotherly kindness charity; or meanness is being added to selfishness, and greed to meanness, and impurity, malice and hatred become courses in the building. A wretched hovel, a poor, mean, squalid structure, is rising within us; and when the screen of our outward life is taken from us, this is what we shall be.

II. Character is independent of reputation and circumstances.—A man may be held in very high esteem by the world, and yet may be a very miserable creature so far as his character is concerned....