Library of the World's Best Literature, Ancient and Modern - Volume 6 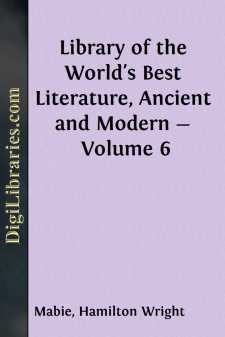 very historian of the Valois period is indebted to Brantôme for preserving the atmosphere and detail of the brilliant life in which he moved as a dashing courtier, a military adventurer, and a gallant gentleman of high degree. He was not a professional scribe, nor a student; but he took notes unconsciously, and in the evening of his life turned back the pages of his memory to record the scenes through which he had passed and the characters which he had known. He has been termed the "valet de chambre" of history; nevertheless the anecdotes scattered through his works will ever be treasured by all students and historians of that age of luxury and magnificence, art and beauty, beneath which lay the fermentation of great religious and political movements, culminating in the struggle between the Huguenots and Catholics.

Brantôme was the third son of the Vicomte de Bourdeille, a Périgord nobleman, whose family had lived long in Guienne, and whose aristocratic lineage was lost in myth. Upon the estate stood the Abbey of Brantôme, founded by Charlemagne, and this Henry II. gave to young Pierre de Bourdeille in recognition of the military deeds of his brother, Jean de Bourdeille, who lost his life in service. Thereafter the lad was to sign his name as the Reverend Father in God, Messire Pierre de Bourdeille, Abbé de Brantôme. Born in the old château in 1527, he was destined for the church, but abandoned this career for arms. At an early age he was sent to court as page to Marguerite, sister of Francis I. and Queen of Navarre; after her death in 1549, he went to Paris to study at the University. His title of Abbé being merely honorary, he served in the army under François de Guise, Duke of Lorraine, and became Gentleman of the Chamber to Charles IX. His career extended through the reigns of Henry II., Francis II., Charles IX., Henry III., and Henry IV., to that of Louis XIII. With the exception of diplomatic missions, service on the battle-field, and voyages for pleasure, he spent his life at court.

About 1594 he retired to his estate, where until his death on July 15th, 1614, he passed his days in contentions with the monks of Brantôme, in lawsuits with his neighbors, and in writing his books: 'Lives of the Illustrious Men and Great Captains of France'; 'Lives of Illustrious Ladies'; 'Lives of Women of Gallantry'; 'Memoirs, containing anecdotes connected with the Court of France'; 'Spanish Rodomontades'; a 'Life' of his father, François de Bourdeille; a 'Funeral Oration' on his sister in-law; and a dialogue in verse, entitled 'The Tomb of Madame de Bourdeille.' These were not published until long after his death, first appearing in Leyden about 1665, at the Hague in 1740, and in Paris in 1787. The best editions are by Fourcault (7 vols., Paris, 1822); by Lacour and Mérimée (3 vols., 1859); and Lalande (10 vols., 1865-'81).

What Brantôme thought of himself may be seen by glancing at that portion of the "testament mystique" which relates to his writings:--

"I will and expressly charge my heirs that they cause to be printed the books which I have composed by my talent and invention....
Show more
Show less