Library of the World's Best Literature, Ancient and Modern - Volume 5 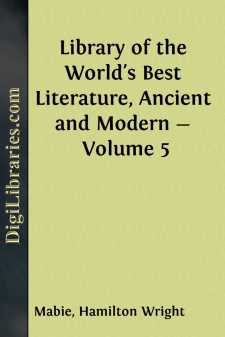 tto Edward Leopold, fourth child of Charles and Wilhelmina von Bismarck, was born at Schönhausen in Prussia, April 1, 1815. The family was one of the oldest in the "Old Mark" (now a part of the province of Saxony), and not a few of its members had held important military or diplomatic positions under the Prussian crown. The young Otto passed his school years in Berlin, and pursued university studies in law (1832-5) at Göttingen and at Berlin. At Göttingen he was rarely seen at lectures, but was a prominent figure in the social life of the student body: the old university town is full of traditions of his prowess in duels and drinking bouts, and of his difficulties with the authorities. In 1835 he passed the State examination in law, and was occupied for three years, first in the judicial and then in the administrative service of the State, at Berlin, Aix-la-Chapelle, and Potsdam. In 1838 he left the governmental service and studied agriculture at the Eldena Academy. From his twenty-fourth to his thirty-sixth year (1839-51) his life was that of a country squire. He took charge at first of property held by his father in Pomerania; upon his father's death in 1845 he assumed the management of the family estate of Schönhausen. Here he held the local offices of captain of dikes and of deputy in the provincial Diet. The latter position proved a stepping-stone into Prussian and German politics; for when Frederick William IV. summoned the "United Diet" of the kingdom (1847), Bismarck was sent to Berlin as an alternate delegate from his province.

The next three years were full of events. The revolution of 1848 forced all the German sovereigns who had thus far retained absolute power, among them the King of Prussia, to grant representative constitutions to their people. The same year witnessed the initiation of a great popular movement for the unification of Germany. A national Parliament was assembled at Frankfort, and in 1849 it offered to the King of Prussia the German imperial crown; but the constitution it had drafted was so democratic, and the opposition of the German princes so great, that Frederick William felt obliged to refuse the offer. An attempt was then made, at a Parliament held in Erfurt, to establish a "narrower Germany" under Prussian leadership; but this movement also came to nothing. The Austrian government, paralyzed for a time by revolts in its own territories, had re-established its power and threatened Prussia with war. Russia supported Austria, and Prussia submitted at Olmütz (1850). In these stirring years, Bismarck--first as a member of the United Diet and then as a representative in the new Prussian Chamber of Deputies--made himself prominent by hostility to the constitutional movement and championship of royal prerogative. He defended the King's refusal of the imperial crown, because "all the real gold in it would be gotten by melting up the Prussian crown"; and he compared the pact which the King, by accepting the Frankfort constitution, would make with the democracy, to the pact between the huntsman and the devil in the 'Freischütz': sooner or later, he declared, the people would come to the Emperor, and pointing to the Imperial arms, would say, "Do you fancy this eagle was given you for nothing?" He sat in the Erfurt Parliament, but had no faith in its success....