Library of the World's Best Literature, Ancient and Modern - Volume 4 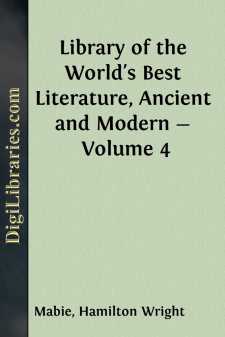 But, in the meantime, Wolfe applied himself intently to reconnoitering the north shore above Quebec. Nature had given him good eyes, as well as a warmth of temper to follow first impressions. He himself discovered the cove which now bears his name, where the bending promontories almost form a basin, with a very narrow margin, over which the hill rises precipitously. He saw the path that wound up the steep, though so narrow that two men could hardly march in it abreast; and he knew, by the number of tents which he counted on the summit, that the Canadian post which guarded it could not exceed a hundred. Here he resolved to land his army by surprise. To mislead the enemy, his troops were kept far above the town; while Saunders, as if an attack was intended at Beauport, set Cook, the great mariner, with others, to sound the water and plant buoys along that shore.

The day and night of the twelfth were employed in preparations. The autumn evening was bright; and the general, under the clear starlight, visited his stations, to make his final inspection and utter his last words of encouragement. As he passed from ship to ship, he spoke to those in the boat with him of the poet Gray, and the 'Elegy in a Country Churchyard.' "I," said he, "would prefer being the author of that poem to the glory of beating the French to-morrow;" and, while the oars struck the river as it rippled in the silence of the night air under the flowing tide, he repeated:--

"The boast of heraldry, the pomp of power,

And all that beauty, all that wealth e'er gave,

The paths of glory lead but to the grave."

Every officer knew his appointed duty, when, at one o'clock in the morning of the thirteenth of September, Wolfe, Monckton, and Murray, and about half the forces, set off in boats, and, using neither sail nor oars, glided down with the tide. In three quarters of an hour the ships followed; and, though the night had become dark, aided by the rapid current, they reached the cove just in time to cover the landing. Wolfe and the troops with him leaped on shore; the light infantry, who found themselves borne by the current a little below the intrenched path, clambered up the steep hill, staying themselves by the roots and boughs of the maple and spruce and ash trees that covered the precipitous declivity, and, after a little firing, dispersed the picket which guarded the height; the rest ascended safely by the pathway. A battery of four guns on the left was abandoned to Colonel Howe. When Townshend's division disembarked, the English had already gained one of the roads to Quebec; and, advancing in front of the forest, Wolfe stood at daybreak with his invincible battalions on the Plains of Abraham, the battle-field of the Celtic and Saxon races.

"It can be but a small party, come to burn a few houses and retire," said Montcalm, in amazement as the news reached him in his intrenchments the other side of the St....