Library of the World's Best Literature, Ancient and Modern - Volume 11 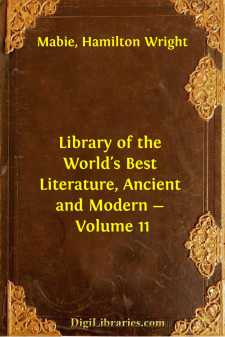 ichard Henry Dana the elder, although he died less than twenty years in 1787, in Cambridge, four years after Washington Irving. He came of a distinguished and scholarly family: his father had been minister to Russia during the Revolution, and was afterwards Chief Justice of Massachusetts; through his mother he was descended from Anne Bradstreet. At the age of ten he went to Newport to live with his maternal grandfather, William Ellery, one of the signers of the Declaration of Independence, and remained until he entered Harvard. The wild rock-bound coast scenery impressed him deeply, and ever after the sea was one of his ruling passions. Only one familiar with all the moods of the ocean could have written 'The Buccaneer'. After quitting college he studied law, and was admitted to the Boston bar. Literature however proved the stronger attraction, and in 1818 he left his profession to assist in conducting the then newly founded North American Review. The critical papers he contributed to it startled the conservative literary circles by their audacity in defending the new movement in English poetry, and passing lightly by their idol Pope. Indeed, his unpopularity debarred him from succeeding the first editor. He withdrew, and began the publication of The Idle Man in numbers, modeled on Salmagundi and the Sketch-Book. His contributions consisted of critical papers and his novelettes 'Paul Felton,' 'Tom Thornton,' and 'Edward and Mary.' Not finding many readers, he discontinued it after the first volume. He then contributed for some years to the New York Review, conducted by William Cullen Bryant, and to the United States Review. In 1827 appeared 'The Buccaneer and Other Poems'; in 1833 the same volume was enlarged and the contributions to The Idle Man were added, under the title 'Poems and Prose Writings.' Seventeen years later he closed his literary career by publishing the complete edition of his 'Poems and Prose Writings,' in two volumes, not having materially added either to his verse or fiction. After that time he lived in retirement, spending his summers in his seaside home by the rocks and breakers of Cape Ann, and the winters in Boston. He died in 1879.

Dana's literary activity falls within the first third of this century. During that period, unproductive of great work, he ranked among the foremost writers. His papers in the North American Review, as the first original criticism on this side of the Atlantic, marked an era in our letters. He was one of the first to recognize the genius of Wordsworth and of Coleridge; under the influence of the latter he wrote the poem by which he is chiefly known, 'The Buccaneer.' He claimed for it a basis of truth; it is in fact a story out of 'The Pirate's Own Book,' with the element of the supernatural added to convey the moral lesson. His verse is contained in a slender volume. It lacks fluency and melody, but shows keen perception of Nature's beauty, especially in her sterner, more solemn moods, and sympathy with the human heart....