Library of the World's Best Literature, Ancient and Modern, Vol. 7 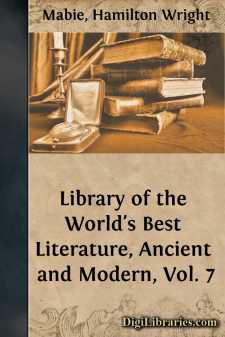 The position which Henry Cuyler Bunner has come to occupy in the literary annals of our time strengthens as the days pass. If the stream of his genius flowed in gentle rivulets, it traveled as far and spread its fruitful influence as wide as many a statelier river. He was above all things a poet. In his prose as in his verse he has revealed the essential qualities of a poet's nature: he dealt with the life which he saw about him in a spirit of broad humanity and with genial sympathy. When he fashioned the tender triolet on the pitcher of mignonette, or sang of the little red box at Vesey Street, he wrote of what he knew; and his stories, even when embroidered with quaint fancies, tread firmly the American soil of the nineteenth century. But Bunner's realism never concerned itself with the record of trivialities for their own sake. When he portrayed the lower phases of city life, it was the humor of that life he caught, and not its sordidness; its kindliness, and not its brutality. His mind was healthy, and since it was a poet's mind, the point upon which it was so nicely balanced was love: love of the trees and flowers, love of his little brothers in wood and field, love of his country home, love of the vast city in its innumerable aspects; above all, love of his wife, his family, and his friends; and all these outgoings of his heart have found touching expression in his verse. Indeed, this attitude of affectionate kinship with the world has colored all his work; it has made his satire sweet-tempered, given his tales their winning grace, and lent to his poetry its abiding power.

The work upon which Bunner's fame must rest was all produced within a period of less than fifteen years. He was born in 1855 at Oswego, New York. He came to the city of New York when very young, and received his education there. A brief experience of business life sufficed to make his true vocation clear, and at the age of eighteen he began his literary apprenticeship on the Arcadian. When that periodical passed away, Puck was just struggling into existence, and for the English edition, which was started in 1877, Bunner's services were secured. Half of his short life was spent in editorial connection with that paper. To his wisdom and literary abilities is due in large measure the success which has always attended the enterprise. Bunner had an intimate knowledge of American character and understood the foibles of his countrymen; but he was never cynical, and his satire was without hostility. He despised opportune journalism. His editorials were clear and vigorous; free not from partisanship, but from partisan rancor, and they made for honesty and independence. His firm stand against political corruption, socialistic vagaries, the misguided and often criminal efforts of labor agitators, and all the visionary schemes of diseased minds, has contributed to the stability of sound and self-respecting American citizenship.

Bunner's first decided success in story-telling was 'The Midge,' which appeared in 1886. It is a tale of New York life in the interesting old French quarter of South Fifth Avenue. Again, in 'The Story of a New York House,' he displayed the same quick feeling for the spirit of the place, as it was and is. This tale first appeared in the newly founded Scribner's Magazine, to which he has since been a constant contributor. Here some of his best short stories have been published, including the excellent 'Zadoc Pine,' with its healthy presentation of independent manhood in contest with the oppressive exactions of labor organizations. But Bunner was no believer in stories with a tendency; the conditions which lie at the root of great sociological questions he used as artistic material, never as texts. His stories are distinguished by simplicity of motive; each is related with fine unobtrusive humor and with an underlying pathos, never unduly emphasized. The most popular of his collections of tales is that entitled 'Short Sixes,' which, having first appeared in Puck, were published in book form in 1891. A second volume came out three years later. When the shadow of death had already fallen upon Bunner, a new collection of his sketches was in process of publication: 'Jersey Street and Jersey Lane.' In these, as in the still more recent 'Suburban Sage,' is revealed the same fineness of sympathetic observation in town and country that we have come to associate with Bunner's name. Among his prose writings there remains to be mentioned the series from Puck entitled 'Made in France.' These are an application of the methods of Maupassant to American subjects; they display that wonderful facility in reproducing the flavor of another's style which is exhibited in Bunner's verse in a still more eminent degree....