Liberalism and the Social Problem 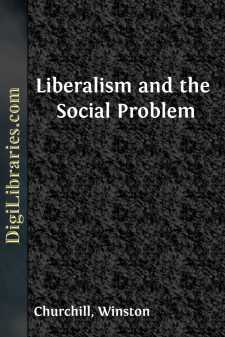 The series of speeches included in this volume ranges, in point of time, from the earlier months of Sir Henry Campbell-Bannerman's Government to the latest phase in the fortunes of Mr. Asquith's succeeding Ministry, and forms an argumentative defence of the basis of policy common to both Administrations. The addresses it contains deal with nearly all the great political topics of the last four years—with Free Trade, Colonial Preferences, the South African settlement, the latest and probably the final charter of trade unionism, the Miners' Bill, the measures for establishing Trade Boards and Labour Exchanges, the schemes of compulsory and voluntary assurance, and the Budget. They possess the further characteristic of describing and commending these proposals as "interdependent" parts of a large and fruitful plan of Liberal statesmanship. Of this scheme the Budget is at once the foundation and the most powerful and attractive feature. If it prospers, the social policy for which it provides prospers too. If it fails, the policy falls to the ground.

The material of these speeches is therefore of great importance to the future of democracy in this country. Let me say a word as to their authorship. To a friendly critic they appear to present not only rare and highly trained qualities of statement and persuasion, but a unity and sincerity of thought which give them a place above mere party dialectics. Mr. Churchill's distinguished service to Liberalism has not been long in point of years, but it opened with the first speeches he ever delivered in the House of Commons. No competent observers of political activities, and of the characters and temperaments which direct them, can have doubted from the first moment of Mr. Churchill's appearance on the stage where his moral and intellectual sympathies lay and whither they would lead him. It is a true and, indeed, an obvious comment on his career to say that he began where his father left off—as a Democrat and a Free Trader, and that on these inherited instincts and tendencies he has built what both his friends and his enemies expected him to build. Mr. Churchill came to Liberalism from the same fold as Gladstone, and for the same reason—that it presented the one field of work open to a political talent of a high stamp, and to a wide and eager outlook on the future of our social order. Liberalism and Mr. Churchill have both had good reason to congratulate themselves on that choice, and the party which failed to draw him into a disastrous and reactionary change of view has no reason to resent it. Before he became a Liberal Mr. Churchill had taken the broad views of the South African problem that his father's later opinions commended to him, and he was properly chosen to expound to the House of Commons the plan of self-government that embodied them.

If, therefore, the political groundwork of these speeches is sound Liberal principle, their meaning and purpose, taken in connection with the Budget, and the industrial reforms for which it provides, signify a notable advance into places where the thinkers, the pioneers, the men in the advanced trenches, are accustomed to dwell....