Letters to His Son on the Art of Becoming a Man of the World and a Gentleman, 1766-71 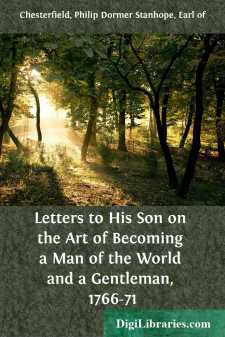 MY DEAR FRIEND: I received two days ago your letter of the 25th past; and your former, which you mention in it, but ten days ago; this may easily be accounted for from the badness of the weather, and consequently of the roads. I hardly remember so severe a win ter; it has occasioned many illnesses here. I am sure it pinched my crazy carcass so much that, about three weeks ago, I was obliged to be let blood twice in four days, which I found afterward was very necessary, by the relief it gave to my head and to the rheumatic pains in my limbs; and from the execrable kind of blood which I lost.

Perhaps you expect from me a particular account of the present state of affairs here; but if you do you will be disappointed; for no man living (and I still less than anyone) knows what it is; it varies, not only daily, but hourly.

Most people think, and I among the rest, that the date of the present Ministers is pretty near out; but how soon we are to have a new style, God knows. This, however, is certain, that the Ministers had a contested election in the House of Commons, and got it but by eleven votes; too small a majority to carry anything; the next day they lost a question in the House of Lords, by three. The question in the House of Lords was, to enforce the execution of the Stamp-act in the colonies 'vi et armis'. What conclusions you will draw from these premises, I do not know; but I protest I draw none; but only stare at the present undecipherable state of affairs, which, in fifty years' experience, I have never seen anything like. The Stamp-act has proved a most pernicious measure; for, whether it is repealed or not, which is still very doubtful, it has given such terror to the Americans, that our trade with them will not be, for some years, what it used to be; and great numbers of our manufacturers at home will be turned a starving for want of that employment which our very profitable trade to America found them: and hunger is always the cause of tumults and sedition.

As you have escaped a fit of the gout in this severe cold weather, it is to be hoped you may be entirely free from it, till next winter at least.

P. S. Lord having parted with his wife, now, keeps another w—-e, at a great expense. I fear he is totally undone.

MY DEAR FRIEND: You wrong me in thinking me in your debt; for I never receive a letter of yours, but I answer it by the next post, or the next but one, at furthest: but I can easily conceive that my two last letters to you may have been drowned or frozen in their way; for portents and prodigies of frost, snow, and inundations, have been so frequent this winter, that they have almost lost their names.

You tell me that you are going to the baths of BADEN; but that puzzles me a little, so I recommend this letter to the care of Mr. Larpent, to forward to you; for Baden I take to be the general German word for baths, and the particular ones are distinguished by some epithet, as Weissbaden, Carlsbaden, etc. I hope they are not cold baths, which I have a very ill opinion of, in all arthritic or rheumatic cases; and your case I take to be a compound of both, but rather more of the latter.

You will probably wonder that I tell you nothing of public matters; upon which I shall be as secret as Hotspur's gentle Kate, who would not tell what she did not know; but what is singular, nobody seems to know any more of them than I do. People gape, stare, conjecture, and refine. Changes of the Ministry, or in the Ministry at least, are daily reported and foretold, but of what kind, God only knows....