Letters to His Son on the Art of Becoming a Man of the World and a Gentleman, 1756-58 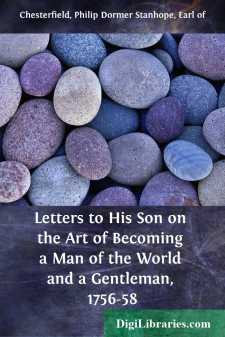 MY DEAR FRIEND: I received yours yesterday morning together with the Prussian, papers, which I have read with great attention. If courts could blush, those of Vienna and Dresden ought, to have their falsehoods so publicly, and so undeniably exposed. The former will, I presume, next year, employ an hundred thousand men, to answer the accusation; and if the Empress of the two Russias is pleased to argue in the same cogent manner, their logic will be too strong for all the King of Prussia's rhetoric. I well remember the treaty so often referred to in those pieces, between the two Empresses, in 1746. The King was strongly pressed by the Empress Queen to accede to it. Wassenaer communicated it to me for that purpose. I asked him if there were no secret articles; suspecting that there were some, because the ostensible treaty was a mere harmless, defensive one. He assured me that there were none. Upon which I told him, that as the King had already defensive alliances with those two Empresses, I did not see of what use his accession to this treaty, if merely a defensive one, could be, either to himself or the other contracting parties; but that, however, if it was only desired as an indication of the King's good will, I would give him an act by which his Majesty should accede to that treaty, as far, but no further, as at present he stood engaged to the respective Empresses by the defensive alliances subsisting with each. This offer by no means satisfied him; which was a plain proof of the secret articles now brought to light, and into which the court of Vienna hoped to draw us. I told Wassenaer so, and after that I heard no more of his invitation.

I am still bewildered in the changes at Court, of which I find that all the particulars are not yet fixed. Who would have thought, a year ago, that Mr. Fox, the Chancellor, and the Duke of Newcastle, should all three have quitted together? Nor can I yet account for it; explain it to me if you can. I cannot see, neither, what the Duke of Devonshire and Fox, whom I looked upon as intimately united, can have quarreled about, with relation to the Treasury; inform me, if you know. I never doubted of the prudent versatility of your Vicar of Bray: But I am surprised at O'Brien Windham's going out of the Treasury, where I should have thought that the interest of his brother-in-law, George Grenville, would have kept him.

Having found myself rather worse, these two or three last days, I was obliged to take some ipecacuanha last night; and, what you will think odd, for a vomit, I brought it all up again in about an hour, to my great satisfaction and emolument, which is seldom the case in restitutions.

You did well to go to the Duke of Newcastle, who, I suppose, will have no more levees; however, go from time to time, and leave your name at his door, for you have obligations to him. Adieu.

MY DEAR FRIEND: What can I say to you from this place, where EVERY DAY IS STILL BUT AS THE FIRST, though by no means so agreeably passed, as Anthony describes his to have been? The same nothings succeed one another every day with me, as, regularly and uniformly as the hours of the day. You will think this tiresome, and so it is; but how can I help it? Cut off from society by my deafness, and dispirited by my ill health, where could I be better? You will say, perhaps, where could you be worse? Only in prison, or the galleys, I confess. However, I see a period to my stay here; and I have fixed, in my own mind, a time for my return to London; not invited there by either politics or pleasures, to both which I am equally a stranger, but merely to be at home; which, after all, according to the vulgar saying, is home, be it ever so homely.

The political settlement, as it is called, is, I find, by no means settled; Mr. Fox, who took this place in his way to his brother's, where he intended to pass a month, was stopped short by an express, which he received from his connection, to come to town immediately; and accordingly he set out from hence very early, two days ago. I had a very long conversation with him, in which he was, seemingly at least, very frank and communicative; but still I own myself in the dark. In those matters, as in most others, half knowledge (and mine is at most that) is more apt to lead one into error, than to carry one to truth; and our own vanity contributes to the seduction. Our conjectures pass upon us for truths; we will know what we do not know, and often, what we cannot know: so mortifying to our pride is the bare suspicion of ignorance!

It has been reported here that the Empress of Russia is dying; this would be a fortunate event indeed for the King of Prussia, and necessarily produce the neutrality and inaction, at least, of that great power; which would be a heavy weight taken out of the opposite scale to the King of Prussia....