Letters to His Son on the Art of Becoming a Man of the World and a Gentleman, 1753-54 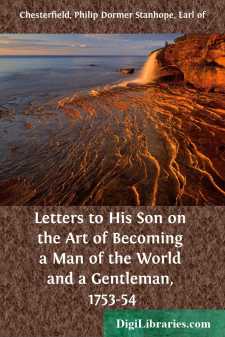 MY DEAR FRIEND: It is now above a fortnight since I have received a letter from you. I hope, however, that you are well, but engrossed by the business of Lord Albemarle's 'bureau' in the mornings, and by business of a genteeler nature in the evenings; for I willingly give up my own satisfaction to your improvement, either in business or manners.

Here have been lately imported from Paris two gentlemen, who, I find, were much acquainted with you there Comte Zinzendorf, and Monsieur Clairant the Academician. The former is a very pretty man, well-bred, and with a great deal of useful knowledge; for those two things are very consistent. I examined him about you, thinking him a competent judge. He told me, 'que vous parliez l'Allemand comme un Allemand; que vous saviez le droit public de l'empire parfaitement bien; que vous aviez le gout sur, et des connoissances fort etendues'. I told him that I knew all this very well; but that I wanted to know whether you had l'air, les manieres, les attentions, en fin le brillant d'un honnete homme': his answer was, 'Mais oui en verite, c'est fort bien'. This, you see, is but cold in comparison of what I do wish, and of what you ought to wish. Your friend Clairant interposed, and said, 'Mais je vous assure qu'il est fort poli'; to which I answered, 'Je le crois bien, vis-a-vis des Lapons vos amis; je vous recuse pour juge, jusqu'a ce que vous ayez ete delaponne, au moins dix ans, parmi les honnetes gens'. These testimonies in your favor are such as perhaps you are satisfied with, and think sufficient; but I am not; they are only the cold depositions of disinterested and unconcerned witnesses, upon a strict examination. When, upon a trial, a man calls witnesses to his character, and that those witnesses only say that they never heard, nor do not know any ill of him, it intimates at best a neutral and insignificant, though innocent character. Now I want, and you ought to endeavor, that 'les agremens, les graces, les attentions', etc., should be a distinguishing part of your character, and specified of you by people unasked. I wish to hear people say of you, 'Ah qu'il est aimable! Quelles manieres, quelles graces, quel art de Claire'! Nature, thank God, has given you all the powers necessary; and if she has not yet, I hope in God she will give you the will of exerting them.

I have lately read with great pleasure Voltaire's two little histories of 'Les Croisades', and 'l'Esprit Humain'; which I recommend to your perusal, if you have not already read them. They are bound up with a most poor performance called 'Micromegas', which is said to be Voltaire's too, but I cannot believe it, it is so very unworthy of him; it consists only of thoughts stolen from Swift, but miserably mangled and disfigured. But his history of the 'Croisades' shows, in a very short and strong light, the most immoral and wicked scheme that was ever contrived by knaves, and executed by madmen and fools, against humanity. There is a strange but never-failing relation between honest madmen and skillful knaves; and whenever one meets with collected numbers of the former, one may be very sure that they are secretly directed by the latter. The popes, who have generally been both the ablest and the greatest knaves in Europe, wanted all the power and money of the East; for they had all that was in Europe already....