Letters to His Son on the Art of Becoming a Man of the World and a Gentleman, 1752 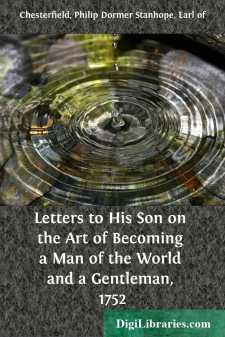 MY DEAR FRIEND: Laziness of mind, or inattention, are as great enemies to knowledge as incapacity; for, in truth, what difference is there between a man who will not, and a man who cannot be informed? This difference only, that the former is justly to be blamed, the latter to be pitied. And yet how many there are, very capable of receiving knowledge, who from laziness, inattention, and incuriousness, will not so much as ask for it, much less take the least pains to acquire it!

Our young English travelers generally distinguish themselves by a voluntary privation of all that useful knowledge for which they are sent abroad; and yet, at that age, the most useful knowledge is the most easy to be acquired; conversation being the book, and the best book in which it is contained. The drudgery of dry grammatical learning is over, and the fruits of it are mixed with, and adorned by, the flowers of conversation. How many of our young men have been a year at Rome, and as long at Paris, without knowing the meaning and institution of the Conclave in the former, and of the parliament in the latter? and this merely for want of asking the first people they met with in those several places, who could at least have given them some general notions of those matters.

You will, I hope, be wiser, and omit no opportunity (for opportunities present themselves every hour of the day) of acquainting yourself with all those political and constitutional particulars of the kingdom and government of France. For instance, when you hear people mention le Chancelier, or 'le Garde de Sceaux', is it any great trouble for you to ask, or for others to tell you, what is the nature, the powers, the objects, and the profits of those two employments, either when joined together, as they often are, or when separate, as they are at present? When you hear of a gouverneur, a lieutenant du Roi, a commandant, and an intendant of the same province, is, it not natural, is it not becoming, is it not necessary, for a stranger to inquire into their respective rights and privileges? And yet, I dare say, there are very few Englishmen who know the difference between the civil department of the Intendant, and the military powers of the others. When you hear (as I am persuaded you must) every day of the 'Vingtieme', which is one in twenty, and consequently five per cent., inquire upon what that tax is laid, whether upon lands, money, merchandise, or upon all three; how levied, and what it is supposed to produce. When you find in books: (as you will sometimes) allusion to particular laws and customs, do not rest till you have traced them up to their source. To give you two examples: you will meet in some French comedies, 'Cri', or 'Clameur de Haro'; ask what it means, and you will be told that it is a term of the law in Normandy, and means citing, arresting, or obliging any person to appear in the courts of justice, either upon a civil or a criminal account; and that it is derived from 'a Raoul', which Raoul was anciently Duke of Normandy, and a prince eminent for his justice; insomuch, that when any injustice was committed, the cry immediately was, 'Venez, a Raoul, a Raoul', which words are now corrupted and jumbled into 'haro'. Another, 'Le vol du Chapon, that is, a certain district of ground immediately contiguous to the mansion-seat of a family, and answers to what we call in English DEMESNES. It is in France computed at about 1,600 feet round the house, that being supposed to be the extent of the capon's flight from 'la basse cour'....