Letters to His Son on the Art of Becoming a Man of the World and a Gentleman, 1750 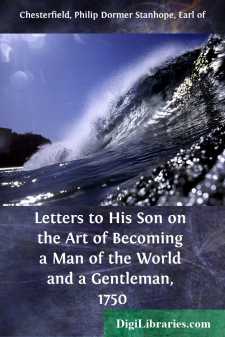 DEAR BOY: I have seldom or never written to you upon the subject of religion and morality; your own reason, I am persuaded, has given you true notions of both; they speak best for themselves; but if they wanted assistance, you have Mr. Harte at hand, both for precept and example; to your own reason, therefore, and to Mr. Harte, shall I refer you for the reality of both, and confine myself in this letter to the decency, the utility, and the necessity of scrupulously preserving the appearances of both. When I say the appearances of religion, I do not mean that you should talk or act like a missionary or an enthusiast, nor that you should take up a controversial cudgel against whoever attacks the sect you are of; this would be both useless and unbecoming your age; but I mean that you should by no means seem to approve, encourage, or applaud, those libertine notions, which strike at religions equally, and which are the poor threadbare topics of halfwits and minute philosophers. Even those who are silly enough to laugh at their jokes, are still wise enough to distrust and detest their characters; for putting moral virtues at the highest, and religion at the lowest, religion must still be allowed to be a collateral security, at least, to virtue, and every prudent man will sooner trust to two securities than to one. Whenever, therefore, you happen to be in company with those pretended 'Esprits forts', or with thoughtless libertines, who laugh at all religion to show their wit, or disclaim it, to complete their riot, let no word or look of yours intimate the least approbation; on the contrary, let a silent gravity express your dislike: but enter not into the subject and decline such unprofitable and indecent controversies. Depend upon this truth, that every man is the worse looked upon, and the less trusted for being thought to have no religion; in spite of all the pompous and specious epithets he may assume, of 'Esprit fort', freethinker, or moral philosopher; and a wise atheist (if such a thing there is) would, for his own interest and character in this world, pretend to some religion.

Your moral character must be not only pure, but, like Caesar's wife, unsuspected. The least speck or blemish upon it is fatal. Nothing degrades and vilifies more, for it excites and unites detestation and contempt. There are, however, wretches in the world profligate enough to explode all notions of moral good and evil; to maintain that they are merely local, and depend entirely upon the customs and fashions of different countries; nay, there are still, if possible, more unaccountable wretches; I mean those who affect to preach and propagate such absurd and infamous notions without believing them themselves. These are the devil's hypocrites. Avoid, as much as possible, the company of such people; who reflect a degree of discredit and infamy upon all who converse with them. But as you may, sometimes, by accident, fall into such company, take great care that no complaisance, no good-humor, no warmth of festal mirth, ever make you seem even to acquiesce, much less to approve or applaud, such infamous doctrines. On the other hand, do not debate nor enter into serious argument upon a subject so much below it: but content yourself with telling these APOSTLES that you know they are not, serious; that you have a much better opinion of them than they would have you have; and that, you are very sure, they would not practice the doctrine they preach. But put your private mark upon them, and shun them forever afterward.

There is nothing so delicate as your moral character, and nothing which it is your interest so much to preserve pure. Should you be suspected of injustice, malignity, perfidy, lying, etc., all the parts and knowledge in the world will never procure you esteem, friendship, or respect. A strange concurrence of circumstances has sometimes raised very bad men to high stations, but they have been raised like criminals to a pillory, where their persons and their crimes, by being more conspicuous, are only the more known, the more detested, and the more pelted and insulted. If, in any case whatsoever, affectation and ostentation are pardonable, it is in the case of morality; though even there, I would not advise you to a pharisaical pomp of virtue. But I will recommend to you a most scrupulous tenderness for your moral character, and the utmost care not to say or do the least thing that may ever so slightly taint it. Show yourself, upon all occasions, the advocate, the friend, but not the bully of virtue. Colonel Chartres, whom you have certainly heard of (who was, I believe, the most notorious blasted rascal in the world, and who had, by all sorts of crimes, amassed immense wealth), was so sensible of the disadvantage of a bad character, that I heard him once say, in his impudent, profligate manner, that though he would not give one farthing for virtue, he would give ten thousand pounds for a character; because he should get a hundred thousand pounds by it; whereas, he was so blasted, that he had no longer an opportunity of cheating people. Is it possible, then, that an honest man can neglect what a wise rogue would purchase so dear...?