Letters on Sweden, Norway, and Denmark 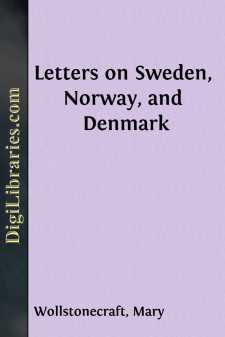 Mary Wollstonecraft was born on the 27th of April, 1759.  Her father—a quick-tempered and unsettled man, capable of beating wife, or child, or dog—was the son of a manufacturer who made money in Spitalfields, when Spitalfields was prosperous.  Her mother was a rigorous Irishwoman, of the Dixons of Ballyshannon.  Edward John Wollstonecraft—of whose children, besides Mary, the second child, three sons and two daughters lived to be men and women—in course of the got rid of about ten thousand pounds, which had been left him by his father.  He began to get rid of it by farming.  Mary Wollstonecraft’s first-remembered home was in a farm at Epping.  When she was five years old the family moved to another farm, by the Chelmsford Road.  When she was between six and seven years old they moved again, to the neighbourhood of Barking.  There they remained three years before the next move, which was to a farm near Beverley, in Yorkshire.  In Yorkshire they remained six years, and Mary Wollstonecraft had there what education fell to her lot between the ages of ten and sixteen.  Edward John Wollstonecraft then gave up farming to venture upon a commercial speculation.  This caused him to live for a year and a half at Queen’s Row, Hoxton.  His daughter Mary was then sixteen; and while at Hoxton she had her education advanced by the friendly care of a deformed clergyman—a Mr. Clare—who lived next door, and stayed so much at home that his one pair of shoes had lasted him for fourteen years.

But Mary Wollstonecraft’s chief friend at this time was an accomplished girl only two years older than herself, who maintained her father, mother, and family by skill in drawing.  Her name was Frances Blood, and she especially, by her example and direct instruction, drew out her young friend’s powers.  In 1776, Mary Wollstonecraft’s father, a rolling stone, rolled into Wales.  Again he was a farmer.  Next year again he was a Londoner; and Mary had influence enough to persuade him to choose a house at Walworth, where she would be near to her friend Fanny.  Then, however, the conditions of her home life caused her to be often on the point of going away to earn a living for herself.  In 1778, when she was nineteen, Mary Wollstonecraft did leave home, to take a situation as companion with a rich tradesman’s widow at Bath, of whom it was said that none of her companions could stay with her.  Mary Wollstonecraft, nevertheless, stayed two years with the difficult widow, and made herself respected.  Her mother’s failing health then caused Mary to return to her.  The father was then living at Enfield, and trying to save the small remainder of his means by not venturing upon any business at all.  The mother died after long suffering, wholly dependent on her daughter Mary’s constant care.  The mother’s last words were often quoted by Mary Wollstonecraft in her own last years of distress—“A little patience, and all will be over.”

After the mother’s death, Mary Wollstonecraft left home again, to live with her friend, Fanny Blood, who was at Walham Green.  In 1782 she went to nurse a married sister through a dangerous illness.  The father’s need of support next pressed upon her.  He had spent not only his own money, but also the little that had been specially reserved for his children.  It is said to be the privilege of a passionate man that he always gets what he wants; he gets to be avoided, and they never find a convenient corner of their own who shut themselves out from the kindly fellowship of life....