Letters on Demonology and Witchcraft 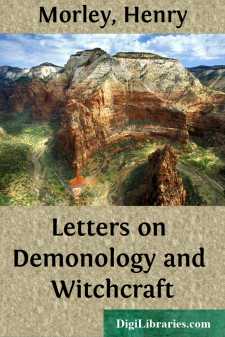 Sir Walter Scott's "Letters on Demonology and Witchcraft" were his contribution to a series of books, published by John Murray, which appeared between the years 1829 and 1847, and formed a collection of eighty volumes known as "Murray's Family Library." The series was planned to secure a wide diffusion of good literature in cheap five-shilling volumes, and Scott's "Letters," written and published in 1830, formed one of the earlier books in the collection.

The Society for the Diffusion of Useful Knowledge had been founded in the autumn of 1826, and Charles Knight, who had then conceived a plan of a National Library, was entrusted, in July, 1827, with the superintendence of its publications. Its first treatises appeared in sixpenny numbers, once a fortnight. Its "British Almanac" and "Companion to the Almanac" first appeared at the beginning of 1829. Charles Knight started also in that year his own "Library of Entertaining Knowledge." John Murray's "Family Library" was then begun, and in the spring of 1832—the year of the Reform Bill—the advance of civilization by the diffusion of good literature, through cheap journals as well as cheap books, was sought by the establishment of "Chambers's Edinburgh Journal" in the North, and in London of "The Penny Magazine."

In the autumn of that year, 1832, on the 21st of September, Sir Walter Scott died. The first warning of death had come to him in February, 1830, with a stroke of apoplexy. He had been visited by an old friend who brought him memoirs of her father, which he had promised to revise for the press. He seemed for half an hour to be bending over the papers at his desk, and reading them; then he rose, staggered into the drawing-room, and fell, remaining speechless until he had been bled. Dieted for weeks on pulse and water, he so far recovered that to friends outside his family but little change in him was visible. In that condition, in the month after his seizure, he was writing these Letters, and also a fourth series of the "Tales of a Grandfather." The slight softening of the brain found after death had then begun. But the old delight in anecdote and skill in story-telling that, at the beginning of his career, had caused a critic of his "Border Minstrelsy" to say that it contained the germs of a hundred romances, yet survived. It gave to Scott's "Letters on Demonology and Witchcraft" what is for us now a pathetic charm. Here and there some slight confusion of thought or style represents the flickering of a light that flashes yet with its old brilliancy. There is not yet the manifest suggestion of the loss of power that we find presently afterwards in "Count Robert of Paris" and "Castle Dangerous," published in 1831 as the Fourth Series of "Tales of My Landlord," with which he closed his life's work at the age of sixty.

Milton has said that he who would not be frustrate of his hope to write well in laudable things, ought himself to be a true poem. Scott's life was a true poem, of which the music entered into all he wrote....