Letters of Ulysses S. Grant to His Father and His Youngest Sister, 1857-78 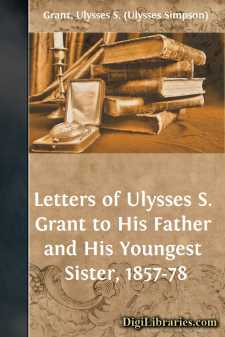 [In 1843, at the age of twenty-one, Ulysses S. Grant was graduated from West Point with the rank of brevet second lieutenant. He was appointed to the 4th Infantry, stationed at Jefferson Barracks near St. Louis. In May, 1844, he was ordered to the frontier of Louisiana with the army of observation, while the annexation of Texas was pending. The bill for the annexation of Texas was passed March 1, 1845; the war with Mexico began in April, 1846. Grant was promoted to a first-lieutenancy September, 1847. The Mexican War closed in 1848. Both this war and the Civil War he characterizes in his Memoirs as "unholy."

Soon after his return from Mexico he was married to Julia Dent. The next six years were spent in military duty in Sacketts Harbor, New York, Detroit, Michigan, and on the Pacific coast. He was promoted to the captaincy of a company in 1853; but because of the inadequacy of a captain's pay, he resigned from the army, July, 1854, and rejoined his wife and children at St. Louis. In speaking of this period Grant says, "I was now to commence at the age of thirty-two a new struggle for our support."

Your letter was received on last Tuesday, the only day in the week on which we get mail, and this is the earliest opportunity I have had of posting a letter.

I am glad to hear that mother and Jennie intend making us a visit. I would advise them to come by the river if they prefer it. Write to me beforehand about the time you will start, and from Louisville again, what boat you will be on, direct to St. Louis,—not Sappington, P.O.—and I will meet you at the river or Planter's House, or wherever you direct.

We are all very well. Julia contemplates visiting St. Charles next Saturday to spend a few days. She has never been ten miles from home, except to come to the city, since her visit to Covington.

I have nothing in particular to write about. My hard work is now over for the season with a fair prospect of being remunerated in everything but the wheat. My wheat, which would have produced from four to five hundred bushels with a good winter, has yielded only seventy-five. My oats were good, and the corn, if not injured by frost this fall, will be the best I ever raised. My potato crop bids fair to yield fifteen hundred bushels or more. Sweet potatoes, melons and cabbages are the only other articles I am raising for market. In fact, the oats and corn I shall not sell.

I see I have written a part of this letter as if I intended to direct to one, and part as if to the other of you; but you will understand it, so it makes no difference.

Write to me soon and often. Julia wears black. I had forgotten to answer that part of your letter.

P.S. Tell father that I have this moment seen Mr....