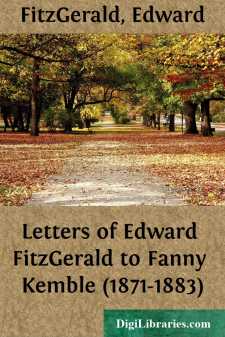 I asked Donne to tell you, if he found opportunity, that some two months ago I wrote you a letter, but found it so empty and dull that I would not send it to extort the Reply which you feel bound to give.  I should have written to tell you so myself; but I heard from Donne of the Wedding soon about to be, and I would not intrude then.  Now that is over —I hope to the satisfaction of you all—and I will say my little say, and you will have to Reply, according to your own Law of Mede and Persian.

It is a shame that one should only have oneself to talk about; and yet that is all I have; so it shall be short.  If you will but tell me of yourself, who have read, and seen, and done, so much more, you will find much more matter for your pen, and also for my entertainment.

Well, I have sold my dear little Ship, because I could not employ my Eyes with reading in her Cabin, where I had nothing else to do.  I think those Eyes began to get better directly I had written to agree to the Man’s proposal.  Anyhow, the thing is done; and so now I betake myself to a Boat, whether on this River here, or on the Sea at the Mouth of it.

Books you see I have nothing to say about.  The Boy who came to read to me made such blundering Work that I was forced to confine him to a Newspaper, where his Blunders were often as entertaining as the Text which he mistook.  We had ‘hangarues’ in the French Assembly, and, on one occasion, ‘ironclad Laughter from the Extreme Left.’  Once again, at the conclusion of the London news, ‘Consolations closed at 91, ex Div.’—And so on.  You know how illiterate People will jump at a Word they don’t know, and twist it in[to] some word they are familiar with.  I was telling some of these Blunders to a very quiet Clergyman here some while ago, and he assured me that a poor Woman, reading the Bible to his Mother, read off glibly, ‘Stand at a Gate and swallow a Candle.’  I believe this was no Joke of his: whether it were or not, here you have it for what you may think it worth.

I should be glad to hear that you think Donne looking and seeming well.  Archdeacon Groome, who saw him lately, thought he looked very jaded: which I could not wonder at.  Donne, however, writes as if in good Spirits—brave Man as he is—and I hope you will be able to tell me that he is not so much amiss.  He said that he was to be at the Wedding.

You will tell me too how long you remain in England; I fancy, till Winter: and then you will go to Rome again, with its new Dynasty installed in it.  I fancy I should not like that so well as the old; but I suppose it’s better for the Country.

I see my Namesake (Percy) Fitzgerald advertizes a Book about the Kembles.  That I shall manage to get sight of.  He made far too long work of Garrick.  I should have thought the Booksellers did not find that pay, judging by the price to which Garrick soon came down.  Half of it would have been enough.

Now I am going for a Sail on the famous River Deben, to pass by the same fields of green Wheat, Barley, Rye, and Beet-root, and come back to the same Dinner.  Positively the only new thing we have in Woodbridge is a Waxen Bust (Lady, of course) at the little Hairdresser’s opposite.  She turns slowly round, to our wonder and delight; and I caught the little Barber the other day in the very Act of winding her up to run her daily Stage of Duty.  Well; she has not got to answer Letters, as poor Mrs....