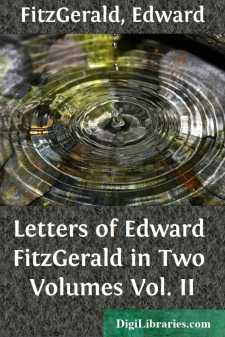 I have been here some five weeks: but before my Letter reaches you shall probably have slid back into the Country somewhere.  This is my old Lodging, but new numbered.  I have been almost alone here: having seen even Spedding and Donne but two or three times.  They are well and go on as before.  Spedding has got out the seventh volume of Bacon, I believe: with Capital Prefaces to Henry VII., etc.  But I have not yet seen it.  After vol. viii. (I think) there is to be a Pause: till Spedding has set the Letters to his Mind.  Then we shall see what he can make of his Blackamoor. . . .

I am almost ashamed to write to you, so much have I forsaken Persian, and even all good Books of late.  There is no one now to ‘prick the Sides of my Intent’; Vaulting Ambition having long failed to do so!  I took my Omar from Fraser [? Parker], as I saw he didn’t care for it; and also I want to enlarge it to near as much again, of such Matter as he would not dare to put in Fraser.  If I print it, I shall do the impudence of quoting your Account of Omar, and your Apology for his Freethinking: it is not wholly my Apology, but you introduced him to me, and your excuse extends to that which you have not ventured to quote, and I do.  I like your Apology extremely also, allowing its Point of View.  I doubt you will repent of ever having showed me the Book.  I should like well to have the Lithograph Copy of Omar which you tell of in your Note.  My Translation has its merit: but it misses a main one in Omar, which I will leave you to find out.  The Latin Versions, if they were corrected into decent Latin, would be very much better. . . .  I have forgotten to write out for you a little Quatrain which Binning found written in Persepolis; the Persian Tourists having the same propensity as English to write their Names and Sentiments on their national Monuments.

In the early part of 1859 his friend William Browne was terribly injured by his horse falling upon him and lingered in great agony for several weeks.

Your folks told you on what Errand I left your house so abruptly.  I was not allowed to see W. B. the day I came: nor yesterday till 3 p.m.; when, poor fellow, he tried to write a line to me, like a child’s! and I went, and saw, no longer the gay Lad, nor the healthy Man, I had known: but a wreck of all that: a Face like Charles I. (after decapitation almost) above the Clothes: and the poor shattered Body underneath lying as it had lain eight weeks; such a case as the Doctor says he had never known.  Instead of the light utterance of other days too, came the slow painful syllables in a far lower Key: and when the old familiar words, ‘Old Fellow—Fitz’—etc., came forth, so spoken, I broke down too in spite of foregone Resolution.

They thought he’d die last Night: but this Morning he is a little better: but no hope.  He has spoken of me in the Night, and (if he wishes) I shall go again, provided his Wife and Doctor approve.  But it agitates him: and Tears he could not wipe away came to his Eyes.  The poor Wife bears up wonderfully.

Above is the Address you had better direct to in future.  I have had a great Loss.  W. Browne was fallen upon and half crushed by his horse near three months ago: and though the Doctors kept giving hopes while he lay patiently for two months in a condition no one else could have borne for a Fortnight, at last they could do no more, nor Nature neither: and he sunk.  I went to see him before he died—the comely spirited Boy I had known first seven and twenty years ago lying all shattered and Death in his Face and Voice....