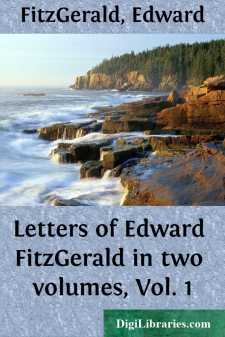 PREFACE TO LETTERS AND LITERARY REMAINS

After Mr. FitzGerald’s death in June 1883 a small tin box addressed to me was found by his executors, containing among other things corrected copies of his printed works, and the following letter, which must have been written shortly after my last visit to him at Easter that year:

I do not suppose it likely that any of my works should be reprinted after my Death.  Possibly the three Plays from the Greek, and Calderon’s Mágico: which have a certain merit in the Form they are cast into, and also in the Versification.

However this may be, I venture to commit to you this Box containing Copies of all that I have corrected in the way that I would have them appear, if any of them ever should be resuscitated.

The C. Lamb papers are only materials for you, or any one else, to use at pleasure.

The Crabbe volume would, I think, serve for an almost sufficient Selection from him; and some such Selection will have to be made, I believe, if he is to be resuscitated.  Two of the Poems—‘The Happy Day’ and ‘The Family of Love’—seem to me to have needed some such abridgement as the ‘Tales of the Hall,’ for which I have done little more than hastily to sketch the Plan.  For all the other Poems, simple Extracts from them will suffice: with a short notice concerning their Dates of Composition, etc., at the Beginning.

My poor old Lowestoft Sea-slang may amuse yourself to look over perhaps.

And so, asking your pardon for inflicting this Box upon you I am ever sincerely yours

In endeavouring to carry out these last wishes of my friend I thought that of the many who know him only as a translator some would be glad to have a picture of him as he appeared to the small circle of his intimate acquaintances.  The mere narrative of the life of a man of leisure and literary tastes would have contained too few incidents to be of general interest, and it appeared to me best to let him be his own biographer, telling his own story and revealing his own character in his letters.  Fortunately there are many of these, and I have endeavoured to give such a selection from them as would serve this purpose, adding a few words here and there to connect them and explain what was not sufficiently evident.  As the letters begin from the time that he left College and continue with shorter or longer intervals till the day before his death, it was only necessary to introduce them by a short sketch of his early life in order to make the narrative complete.

FitzGerald’s letters, like his conversation, were perfectly unaffected and full of quiet humour.  In his lonely life they were the chief means he had of talking with his friends, and they were always welcome.  In reply to one of them Carlyle wrote: ‘Thanks for your friendly human letter; which gave us much entertainment in the reading (at breakfast time the other day), and is still pleasant to think of.  One gets so many inhuman letters, ovine, bovine, porcine, etc., etc.: I wish you would write a little oftener; when the beneficent Daimon suggests, fail not to lend ear to him.’  Another, who has since followed him ‘from sunshine to the sunless land,’ and to whom he wrote of domestic affairs, said, ‘The striking feature in his correspondence with me is the exquisite tenderness of feeling which it exhibits in regard to all family matters; the letters might have been written by a mother or a sister.’  He said of himself that his friendships were more like loves, and as he was constant in affectionate loyalty to others, he might also say with Brutus,

In all my lifeI found no man but he was true to me.

The Poet-Laureate, on hearing of his death, wrote to the late Sir Frederic Pollock: ‘I had no truer friend: he was one of the kindliest of men, and I have never known one of so fine and delicate a wit.  I had written a poem to him the last week, a dedication, which he will never see.’

When Thackeray, not long before he died, was asked by his daughter which of his old friends he had loved most, he replied, ‘Why, dear old Fitz, to be sure; and Brookfield.’

And Carlyle, quick of eye to discern the faults and weaknesses of others, had nothing but kindliness, with perhaps a touch of condescension, ‘for the peaceable, affectionate, and ultra-modest man, and his innocent far niente life.’

It was something to have been intimate with three such friends, and one can only regret that more of his letters addressed to them have not been preserved.  Of those written to the earliest and dearest friend of all, James Spedding, not one is left....