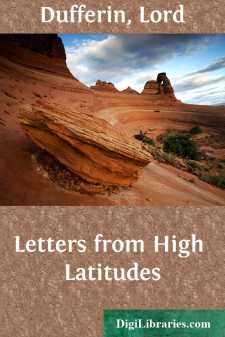 "Skrymer stooped and took up his glove, and Thor saw that it was the house in which they had passed the night, and that the out-building was the thumb."

Here follow incidents which do not differ widely from certain passages in the history of Jack the Giant Killer. Thor makes three several attempts to knock out the easy- going giant's brains during a slumber, in which he is represented as "snoring outrageously,"—and after each blow of the Thunder god's hammer, Skrymer merely wakes up—strokes his beard—and complains of feeling some trifling inconvenience, such as a dropped acorn on his head, a fallen leaf, or a little moss shaken from the boughs. Finally, he takes leave of them,—points out the way to Utgard Loke's palace, advises them not to give themselves airs at his court,—as unbecoming "such little fellows" as they were, and disappears in the wood; "and"—as the old chronicler slyly adds—"it is not said whether the OEsir wished ever to see him again."

They then journey on till noon, till they come to a vast palace, where a multitude of men, of whom the greater number were immensely large, sat on two benches. "After this they advanced into the presence of the king, Utgard Loke, and saluted him. He scarcely deigned to give a look, and said smiling: 'It is late to inquire after true tidings from a great distance, but is it not Thor that I see? Yet you are really bigger than I imagined. What are the exploits that you can perform? For no one is tolerated amongst us who cannot distinguish himself by some art or accomplishment.'

"'Then,' said Lopt, 'I understand an art of which I am prepared to give proof, and that is, that no one here can dispose of his food as I can.' Then answered Utgard Loke: 'Truly this IS an art, if thou canst achieve it; which we will now see.' He called from the bench a man named Loge to contend with Lopt. They set a trough in the middle of the hall, filled with meat. Lopt placed himself at one end and Loge at the other. Both ate the best they could, and they met in the middle of the trough. Lopt had picked the meat from the bones, but Loge had eaten meat, bones, and trough altogether. All agreed Lopt was beaten. Then asked Utgard Loke what art the young man (Thor's attendant) understood? Thjalfe answered, that he would run a race with any one that Utgard Loke would appoint. There was a very good race ground on a level field. Utgard Loke called a young man named Huge, and bade him run with Thjalfe. Thjalfe runs his best, at three several attempts—according to received Saga customs,—but is of course beaten in the race.

"Then asked Utgard Loke of Thor, what were the feats that he would attempt corresponding to the fame that went abroad of him? Thor answered that he thought he could beat any one at drinking. Utgard Loke said, 'Very good,' and bade his cup-bearer bring out the horn from which his courtiers were accustomed to drink. Immediately appeared the cup-bearer, and placed the horn in Thor's hand. Utgard Loke then said, 'that to empty that horn at one pull was well done; some drained it at twice; but that he was a wretched drinker who could not finish it at the third draught.' Thor looked at the horn, and thought that it was not large, though it was tolerably long....