Leslie Ross: or, Fond of a Lark 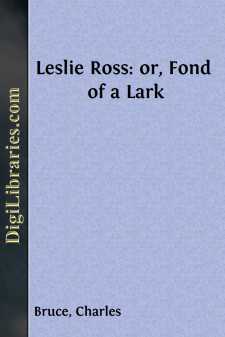 CHAPTER I. WHY LESLIE ROSS WAS SENT TO SCHOOL.

If ever a boy had kind parents and a happy home, that boy was Leslie Ross. He was an only child, and as such the love and care of both father and mother centered upon and surrounded him. He had once had a baby sister, whom he recollected to have kissed several times—and once when her cheeks were very, very cold and pale—but in a few days she had faded away; and now the love which she would have shared was all his, and the care which she would have demanded was expended upon him.

Never were parents so careful that the childhood of a son should be surrounded by pleasant associations and memories, as were Mr and Mrs Ross. They would whisper to each other, while labouring to procure some fresh pleasure for Leslie, "We do not know what his future life may be; it may be a rough and rugged one; it may not be a very happy one; we shall be unable to smooth his path then; so let us make his childhood and boyhood as happy as possible, that he may always look back upon it as the freshest and greenest spot in his life, and carry the recollection of our love in his heart all his days."

With parents labouring to carry out such an idea, it need scarcely be added that Leslie was a happy boy; such, indeed, he was. One circumstance, which formed a large item in his sum of happiness, consisted in the fact that his home was close to the sea shore. The restless sea could be seen from the windows of the house; and the sound of its waves, as they fell gently or dashed violently on to the shingly beach, could be heard in the warm, cosy parlour, or the silent bedrooms.

As soon as he could walk, Leslie manifested a decided preference for the beach as his playground, and aquatic pursuits as his pleasures; and his daily explorations among the boats and fishing-smacks soon procured for him the notice and friendship of several of the boatmen and fishermen, who almost always take a liking to those who interest themselves in their pursuits; and Leslie did this, for he loved to watch the men, as, waist deep in the sea, they dredged for shrimps; to catch hold of one end of a net and help haul it ashore; to carry the oars of a boat which was about to be launched, and even to add his tiny strength to that of the sturdy men in the attempt to float a fishing smack, while his shrill "heave ho!" could be distinctly heard mingling with the gruff tones of the fishers.

With the sanction of Mr Ross, one of the boatmen taught him to swim at a very early age; while a second manufactured and taught him how to handle a pair of oars; so that by the time Leslie was ten years of age, he could both row and swim very creditably, much to his own satisfaction and delight, and to the contentment of his parents who were happy in their son's happiness; they were, however, too mindful of the risk he ran to allow him to venture on the water unattended, and had strictly enjoined him to observe this rule, and although at times strongly tempted to disobey, Leslie never violated the command.

There was but one trait in the character of their son which gave Mr and Mrs Ross any concern; he was truthful, honest, and brave, but he was fond of what he called "a lark!" which was the name Leslie gave to the successful accomplishment of a piece of mischief. He did not actually intend mischief, or intend doing any harm, but his love for "a lark" led him farther than at the time he had any idea, and the expression "what a lark!" seemed in his eyes an ample compensation for all the discomforts he inflicted upon others.

Thus he thought it no end of "a lark" when, one Sunday morning, he put the long hand of all the clocks in the house back, so that his father, who was a clergyman, and very punctual in the performance of his duties, was ten minutes behind time, and found all the assembled congregation anxiously waiting his arrival....