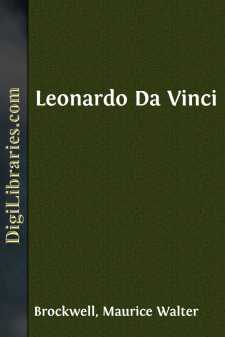 Leonardo Da Vinci, the many-sided genius of the Italian Renaissance, was born, as his name implies, at the little town of Vinci, which is about six miles from Empoli and twenty miles west of Florence. Vinci is still very inaccessible, and the only means of conveyance is the cart of a general carrier and postman, who sets out on his journey from Empoli at sunrise and sunset. Outside a house in the middle of the main street of Vinci to-day a modern and white-washed bust of the great artist is pointed to with much pride by the inhabitants. Leonardo's traditional birthplace on the outskirts of the town still exists, and serves now as the headquarters of a farmer and small wine exporter.

Leonardo di Ser Piero d'Antonio di Ser Piero di Ser Guido da Vinci—for that was his full legal name—was the natural and first-born son of Ser Piero, a country notary, who, like his father, grandfather, and great-grandfather, followed that honourable vocation with distinction and success, and who subsequently—when Leonardo was a youth—was appointed notary to the Signoria of Florence. Leonardo's mother was one Caterina, who afterwards married Accabriga di Piero del Vaccha of Vinci.

The date of Leonardo's birth is not known with any certainty. His age is given as five in a taxation return made in 1457 by his grandfather Antonio, in whose house he was educated; it is therefore concluded that he was born in 1452. Leonardo's father Ser Piero, who afterwards married four times, had eleven children by his third and fourth wives. Is it unreasonable to suggest that Leonardo may have had these numbers in mind in 1496-1498 when he was painting in his famous "Last Supper" the figures of eleven Apostles and one outcast?

However, Ser Piero seems to have legitimised his "love child" who very early showed promise of extraordinary talent and untiring energy.

Practically nothing is known about Leonardo's boyhood, but Vasari informs us that Ser Piero, impressed with the remarkable character of his son's genius, took some of his drawings to Andrea del Verrocchio, an intimate friend, and begged him earnestly to express an opinion on them. Verrocchio was so astonished at the power they revealed that he advised Ser Piero to send Leonardo to study under him. Leonardo thus entered the studio of Andrea del Verrocchio about 1469-1470. In the workshop of that great Florentine sculptor, goldsmith, and artist he met other craftsmen, metal workers, and youthful painters, among whom was Botticelli, at that moment of his development a jovial _habitué_ of the Poetical Supper Club, who had not yet given any premonitions of becoming the poet, mystic, and visionary of later times. There also Leonardo came into contact with that unoriginal painter Lorenzo di Credi, his junior by seven years....