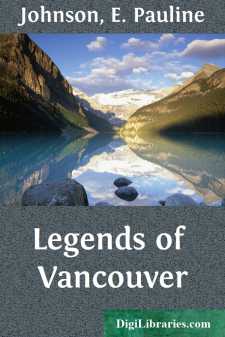 I have been asked to write a preface to these Legends of Vancouver, which, in conjunction with the members of the Publication Sub-committee—Mrs. Lefevre, Mr. L. W. Makovski and Mr. R. W. Douglas—I have helped to put through the press. But scarcely any prefatory remarks are necessary. This book may well stand on its own merits. Still, it may be permissible to record one's glad satisfaction that a poet has arisen to cast over the shoulders of our grey mountains, our trail-threaded forests, our tide-swept waters, and the streets and skyscrapers of our hurrying city, a gracious mantle of romance. Pauline Johnson has linked the vivid present with the immemorial past. Vancouver takes on a new aspect as we view it through her eyes. In the imaginative power that she has brought to these semi-historical sagas, and in the liquid flow of her rhythmical prose, she has shown herself to be a literary worker of whom we may well be proud: she has made a most estimable contribution to purely Canadian literature.

These legends (with two or three exceptions) were told to me personally by my honored friend, the late Chief Joe Capilano, of Vancouver, whom I had the privilege of first meeting in London in 1906, when he visited England and was received at Buckingham Palace by their Majesties King Edward VII and Queen Alexandra.

To the fact that I was able to greet Chief Capilano in the Chinook tongue, while we were both many thousands of miles from home, I owe the friendship and the confidence which he so freely gave me when I came to reside on the Pacific Coast. These legends he told me from time to time, just as the mood possessed him, and he frequently remarked that they had never been revealed to any other English-speaking person save myself.

E. Pauline Johnson (Tekahionwake) is the youngest child of a family of four born to the late G. H. M. Johnson (Onwanonsyshon), Head Chief of the Six Nations Indians, and his wife Emily S. Howells. The latter was of English parentage, her birthplace being Bristol, but the land of her adoption Canada.

Chief Johnson was of the renowned Mohawk tribe, being a scion of one of the fifty noble families which composed the historical confederation founded by Hiawatha upwards of four hundred years ago, and known at that period as the Brotherhood of the Five Nations, but which was afterwards named the Iroquois by the early French missionaries and explorers. For their loyalty to the British Crown they were granted the magnificent lands bordering the Grand River, in the County of Brant, Ontario, on which the tribes still live.

It was upon this Reserve, on her father's estate, "Chiefswood," that Pauline Johnson was born. The loyalty of her ancestors breathes in her prose, as well as in her poetic writings.

Her education was neither extensive nor elaborate. It embraced neither high school nor college. A nursery governess for two years at home, three years at an Indian day school half a mile from her home, and two years in the Central School of the city of Brantford, was the extent of her educational training....