Legends of the Saxon Saints 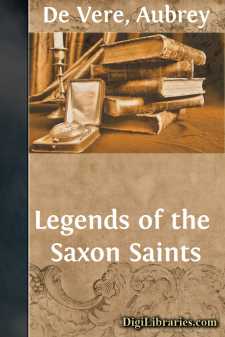 Many years ago a friend remarked to me on the strangeness of the circumstance that the greatest event in the history of a nation, its conversion to Christianity, largely as it is often recorded in national legends, has never been selected as a theme for poetry. That event may indeed not supply the materials necessary for an Epic or a Drama, yet it can hardly fail to abound in details significant and pathetic, which especially invite poetic illustration. With the primary interest of that great crisis, many others, philosophical, social, and political, generally connect themselves. Antecedent to a nation's conversion, the events of centuries have commonly either conduced to it, or thrown obstacles in its way; while the history as well as the character of that nation in the subsequent ages is certain to have been in a principal measure modified by that event. Looking back consequently on that period in which the moral influences of ages, early and late, are imaged, a people recognises its own features as in a mirror, but sees them such as they were when their expression was still undetermined; and it may well be struck by the resemblance at once to what now exists, and also by the dissimilitude. Many countries have unhappily lost almost all authentic records connected with their conversion. Such would have been the fate of England also, had it not been for a single book, 'Bede's Ecclesiastical History.' In the following poems I have endeavoured to walk in the footsteps of that great master. Their scope will best be indicated by some remarks upon the character of that wonderful age which he records.

St. Augustine landed in the Isle of Thanet A.D. 597, and Bede died A.D. 735. The intervening period, that of his chronicle, is the golden age of Anglo-Saxon sanctity. Notwithstanding some twenty or thirty years of pagan reaction, it was a time of rapid though not uninterrupted progress, and one of an interest the more touching when contrasted with the calamities which followed so soon. Between the death of Bede and the first Danish invasion, were eighty years, largely years of decline, moral and religious. Then followed eighty years of retribution, those of the earlier Danish wars, till, with the triumph of Alfred, England's greatest king, came the Christian restoration. Once more periods of relaxed morals and sacrilegious princes alternated with intervals of reform; again and again the Northmen over-swept the land. The 460 years of Anglo-Saxon Christianity constituted a period of memorable achievements and sad vicissitudes; but that period included more than a hundred years of high sanctity, belonging for the most part to the seventh century, a century to England as glorious as was the thirteenth to Mediæval Europe.

Within that century the kingdoms of the Heptarchy successively became Christian, and those among them which had relapsed returned to the Faith. Sovereigns, many of whom had boasted a descent from Odin himself, stood as interpreters beside the missionaries when they preached, and rivalled each other in the zeal with which they built churches, some of which were founded on the sites of ancient temples, though, in other cases, with a charitable prudence, the existing fanes were spared, purified, and adapted to Christian worship....