Legends of the Rhine 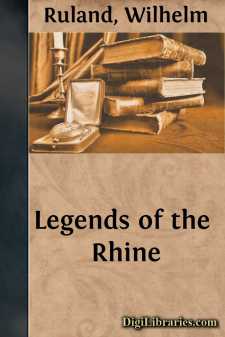 In the region where the Rhine has its source there towered in ancient times a green Alp. This Alp belonged to an honest peasant, and along with a neat little house in the valley below formed his only possession.

The man died suddenly and was deeply mourned by his wife and child. Some days after an unexpected visitor was announced to the widow. He was a man who had much pastureland up in that region, but for a long time his one desire had been to possess the Alp of his neighbour now deceased, as by it his property would be rounded off to his satisfaction.

Quickly making his resolution he declared to the dismayed woman that the Alp belonged to him: her husband had secretly pledged it to him in return for a loan, after the bad harvest of the previous year. When the widow angrily accused him of being a liar the man produced a promissory note, spread it out, and with a hard laugh showed her his statement was confirmed in black and white. The distressed woman burst into tears and declared it was impossible that her late husband should have made a secret transaction of such a nature. The Alp was the sole inheritance of their son, and never would she willingly surrender it.

"I will pay you compensation for the renunciation of your claim, although nothing obliges me to do so," declared the visitor with apparent compassion, in the meantime producing his purse.

The weeping woman motioned to him to put back his gold and told him to go, which he did.

Three days later the widow was summoned before the judge. There the neighbour produced his document and repeated his demand for the possession of the disputed Alp.

The judge, who had been shamefully bribed, declared the document valid and awarded the Alp to the pursuer. The broken-hearted widow staggered home.

The new possessor of the Alp on the other hand hastened up to the mountains at full gallop. The man could no longer master his impatience to see for the first time as his legally recognised property the pastureland he had acquired by deceit.

There, for three days a storm had raged uninterruptedly. As quickly as the soaked ways would permit he ascended to the high country.

Having arrived he stared around with horrified eyes, and fell in a swoon to the earth, overcome with consternation.

Upon the soft green Alp an unseen hand had rolled a mountain of ice. Of the possession which the unjust judge had assigned to him nothing was now to be seen. His own pastures too which adjoined were covered with snow and ice, whilst the meadows of the other Alpsmen below, lay spread out in the morning light like a velvet carpet.

Towards noon a broken man rode home into the valley cursing himself and the wicked magistrate who had consented to such an evil transaction.

The people there however said to each other: "The Fronfasten Mütterli (the little mother of the Emberweeks) Frau Sälga passed over our valley last night with her train of maidens. Over the house of that greedy rich man the ghostly company stopped, and by that it is fixed which one must die in the course of the year."

And so it happened. Up there where the youthful Rhine rushes down through deep rocky chasms the petrified Alp stands to this day, a silent warning from by-gone days.