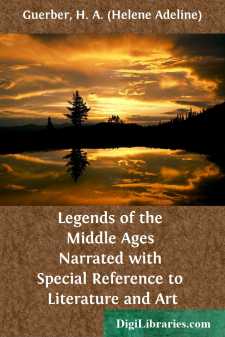 The most ancient relic of literature of the spoken languages of modern Europe is undoubtedly the epic poem "Beowulf," which is supposed to have been composed by the Anglo-Saxons previous to their invasion of England. Although the poem probably belongs to the fifth century, the only existing manuscript is said to date from the ninth or tenth century.

This curious work, in rude alliterative verse (for rhyme was introduced in England only after the Norman Conquest), is the most valuable old English manuscript in the British Museum. Although much damaged by fire, it has been carefully studied by learned men. They have patiently restored the poem, the story of which is as follows:

[Sidenote: Origin of the Skioldungs.] Hrothgar (the modern Roger), King of Denmark, was a descendant of Odin, being the third monarch of the celebrated dynasty of the Skioldungs. They proudly traced their ancestry to Skeaf, or Skiold, Odin's son, who mysteriously drifted to their shores. He was then but an infant, and lay in the middle of a boat, on a sheaf of ripe wheat, surrounded by priceless weapons and jewels. As the people were seeking for a ruler, they immediately recognized the hand of Odin in this mysterious advent, proclaimed the child king, and obeyed him loyally as long as he lived. When he felt death draw near, Skeaf, or Skiold, ordered a vessel to be prepared, lay down in the midst on a sheaf of grain or on a funeral pyre, and drifted out into the wide ocean, disappearing as mysteriously as he had come.

[Sidenote: Construction of Heorot.] Such being his lineage, it is no wonder that Hrothgar became a mighty chief; and as he had amassed much wealth in the course of a long life of warfare, he resolved to devote part of it to the construction of a magnificent hall, called Heorot, where he might feast his retainers and listen to the heroic lays of the scalds during the long winter evenings.

"A hall of mead, such as for space and state    The elder time ne'er boasted; there with free    And princely hand he might dispense to all    (Save the rude crowd and men of evil minds)    The good he held from Heaven. That gallant work,    Full well I wot, through many a land was known    Of festal halls the brightest and the best."                                        Beowulf (Conybeare's tr.).The inauguration of this hall was celebrated by a sumptuous entertainment;and when all the guests had retired, the king's bodyguard, composed ofthirty-two dauntless warriors, lay down in the hall to rest. When morningdawned, and the servants appeared to remove the couches, they beheld withhorror the floor and walls all stained with blood, the only trace of theknights who had gone to rest there in full armor....