Legends of the Madonna as Represented in the Fine Arts 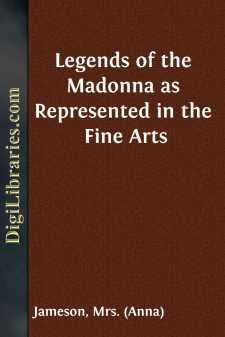 I. ORIGIN AND HISTORY OF THE EFFIGIES OF THE MADONNA.

Through all the most beautiful and precious productions of human genius and human skill which the middle ages and the renaissance have bequeathed to us, we trace, more or less developed, more or less apparent, present in shape before us, or suggested through inevitable associations, one prevailing idea: it is that of an impersonation in the feminine character of beneficence, purity, and power, standing between an offended Deity and poor, sinning, suffering humanity, and clothed in the visible form of Mary, the Mother of our Lord.

To the Roman Catholics this idea remains an indisputable religious truth of the highest import. Those of a different creed may think fit to dispose of the whole subject of the Madonna either as a form of superstition or a form of Art. But merely as a form of Art, we cannot in these days confine ourselves to empty conventional criticism. We are obliged to look further and deeper; and in this department of Legendary Art, as in the others, we must take the higher ground, perilous though it be. We must seek to comprehend the dominant idea lying behind and beyond the mere representation. For, after all, some consideration is due to facts which we must necessarily accept, whether we deal with antiquarian theology or artistic criticism; namely, that the worship of the Madonna did prevail through all the Christian and civilized world for nearly a thousand years; that, in spite of errors, exaggerations, abuses, this worship did comprehend certain great elemental truths interwoven with our human nature, and to be evolved perhaps with our future destinies. Therefore did it work itself into the life and soul of man; therefore has it been worked out in the manifestations of his genius; and therefore the multiform imagery in which it has been clothed, from the rudest imitations of life, to the most exquisite creations of mind, may be resolved, as a whole, into one subject, and become one great monument in the history of progressive thought and faith, as well as in the history of progressive art.

Of the pictures in our galleries, public or private,—of the architectural adornments of those majestic edifices which sprung up in the middle ages (where they have not been despoiled or desecrated by a zeal as fervent as that which reared them), the largest and most beautiful portion have reference to the Madonna,—her character, her person, her history. It was a theme which never tired her votaries,—whether, as in the hands of great and sincere artists, it became one of the noblest and loveliest, or, as in the hands of superficial, unbelieving, time-serving artists, one of the most degraded. All that human genius, inspired by faith, could achieve of best, all that fanaticism, sensualism, atheism, could perpetrate of worst, do we find in the cycle of those representations which have been dedicated to the glory of the Virgin. And indeed the ethics of the Madonna worship, as evolved in art, might be not unaptly likened to the ethics of human love: so long as the object of sense remained in subjection to the moral idea—so long as the appeal was to the best of our faculties and affections—so long was the image grand or refined, and the influences to be ranked with those which have helped to humanize and civilize our race; but so soon as the object became a mere idol, then worship and worshippers, art and artists, were together degraded....