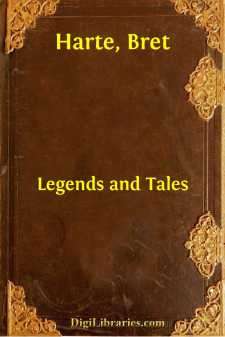 THE LEGEND OF MONTE DEL DIABLO.

The cautious reader will detect a lack of authenticity in the following pages. I am not a cautious reader myself, yet I confess with some concern to the absence of much documentary evidence in support of the singular incident I am about to relate. Disjointed memoranda, the proceedings of ayuntamientos and early departmental juntas, with other records of a primitive and superstitious people, have been my inadequate authorities. It is but just to state, however, that though this particular story lacks corroboration, in ransacking the Spanish archives of Upper California I have met with many more surprising and incredible stories, attested and supported to a degree that would have placed this legend beyond a cavil or doubt. I have, also, never lost faith in the legend myself, and in so doing have profited much from the examples of divers grant-claimants, who have often jostled me in their more practical researches, and who have my sincere sympathy at the scepticism of a modern hard-headed and practical world.

For many years after Father Junipero Serro first rang his bell in the wilderness of Upper California, the spirit which animated that adventurous priest did not wane. The conversion of the heathen went on rapidly in the establishment of Missions throughout the land. So sedulously did the good Fathers set about their work, that around their isolated chapels there presently arose adobe huts, whose mud-plastered and savage tenants partook regularly of the provisions, and occasionally of the Sacrament, of their pious hosts. Nay, so great was their progress, that one zealous Padre is reported to have administered the Lord's Supper one Sabbath morning to "over three hundred heathen Salvages." It was not to be wondered that the Enemy of Souls, being greatly incensed thereat, and alarmed at his decreasing popularity, should have grievously tempted and embarrassed these Holy Fathers, as we shall presently see.

Yet they were happy, peaceful days for California. The vagrant keels of prying Commerce had not as yet ruffled the lordly gravity of her bays. No torn and ragged gulch betrayed the suspicion of golden treasure. The wild oats drooped idly in the morning heat, or wrestled with the afternoon breezes. Deer and antelope dotted the plain. The watercourses brawled in their familiar channels, nor dreamed of ever shifting their regular tide. The wonders of the Yosemite and Calaveras were as yet unrecorded. The Holy Fathers noted little of the landscape beyond the barbaric prodigality with which the quick soil repaid the sowing. A new conversion, the advent of a Saint's day, or the baptism of an Indian baby, was at once the chronicle and marvel of their day.

At this blissful epoch there lived at the Mission of San Pablo Father Jose Antonio Haro, a worthy brother of the Society of Jesus. He was of tall and cadaverous aspect. A somewhat romantic history had given a poetic interest to his lugubrious visage. While a youth, pursuing his studies at famous Salamanca, he had become enamored of the charms of Dona Carmen de Torrencevara, as that lady passed to her matutinal devotions....