Left on Labrador or, The cruise of the Schooner-yacht 'Curlew.' as Recorded by 'Wash.' 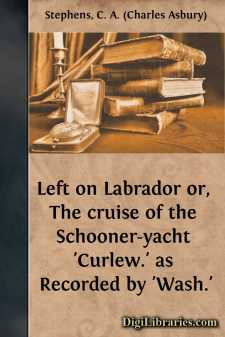 Raed got home from Katahdin on the night of the 15th of May. Kit came with him; and together they called on Wade and the writer of the following narrative early on the morning of the 16th. Brown enough both boys looked, exposed as they had been to the tanning winds for more than a fortnight.

"Jubilate!" shouted Raed, as I opened the door. "Latest news from Mount Katahdin,—graphite stock clean up to the moon!"

Wade came looking down stairs, nothing on but his gown and slippers. At sight of his tousled head both our callers gave a whoop of recognition, and set upon him,—shook him out of his slippers, and pulled him down the steps on to the sidewalk barefoot; thereby scandalizing a whole houseful of prim damsels across the street, who indignantly pulled down their curtains. Such a hand-shaking and back-patting as ensued! All the hardships and discouragement we had endured on our last season's expedition seemed to bear an exultant harvest in this our final success.

"But you haven't been to breakfast!" exclaimed Kit.

"So they haven't!" cried Raed. "Well, can't do business till they have their breakfast. We'll leave 'em to guzzle their coffee in peace. But hurry up! We must hold a council this morning,—have a grand pow-wow! Come round at nine sharp."

We ate breakfast, and went down to Raed's, where we got into the back parlor, shut the doors, and proceeded to pow-wow. Wade was chosen president of the meeting; Kit, secretary.

"I move we accept the gentleman's statement, and tender our sincere thanks for his eminently successful services," said a voice.

The motion was seconded by Kit, and carried.

"Question now arises," Raed resumed, "What shall we do with this money? Of course we must plant it somewhere, have it growing, what we don't want to use immediately."

"Might speculate a little with it," suggested Wade, "so as to double it up along."

"And risk losing the whole of it," put in Kit.

"'Nothing risked, nothing gained,'" quoted Wade. "What say, Raed? Why not buy gold?"

"Don't know about that," remarked Wade. "Your abolition government may turn a somersault some fine morning."

"Well, it won't strike on its head if it does,—like a certain government we've all heard of," retorted Kit....