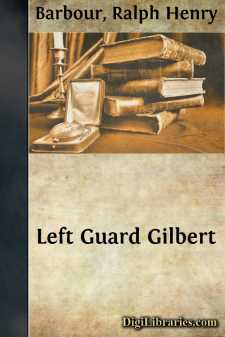 CHAPTER I THE BOY FROM KANSAS "Hold up!"

Coach Robey, coatless, vestless, hatless, his old flannel trousers held up as by a miracle with the aid of a leather strap scarcely deserving the name of belt, pushed his way through the first squad players. The Brimfield Head Coach was a wiry, medium-sized man of about thirty, with a deeply-tanned face from which sharp blue eyes looked out under whitish lashes that were a shade lighter than his eyebrows and two shades lighter than his sandy hair. As the afternoon was excessively hot, even for the twenty-first day of September and in proximity to Long Island Sound, Mr. George Robey's countenance was bathed in perspiration and the faded blue silk shirt was plastered to his body.

"That was left half through guard-tackle, wasn't it? Then don't put the ball in your arm, St. Clair. You ought to know better than that. On plays through the line hold it against your stomach with both hands. How long do you think you'd keep that ball in your elbow after you hit the line? Someone would knock it out in about one second! Now try it again and think what you're doing. All right, Carmine. Same play."

The panting and perspiring backs crouched once more, Carmine shrilly called his signals, Thayer and Gafferty plunged against an imaginary foe as Thursby shot the ball back and St. Clair, hugging the pigskin ecstatically with wide-spread fingers, trotted through the hole, stopped, set the ball on the grass and wiped his streaming face with the torn sleeve of a maroon jersey.

"All right," said the coach. "That will do for today. In on the trot, everyone!"

The first squad, exhaling a long, deep sigh of relief as one man, set their faces toward the gymnasium and trotted slowly off, their canvas-clad legs swish-swashing as they met. Coach Robey walked further down the sun-baked field to where the nearer of the remaining four squads was at work.

"Oh, put some pep into it, McPhee!" called the coach as he approached. "You all look as if you were asleep! Come on now! Wake up! Jones, get up there. You're away out of position. That's better. Now then, Quarter! Hold up! What's your down?"

"All right. Show me what you're going to do with it. Head up, Martin! Look where you're going."

"Signal!" cried Gordon, at right half.

McPhee straightened, cast a withering look at the half-back, wiped the perspiration from the end of his sun-burnt nose and repeated:

Gordon shifted his feet, and—

"Hold up!" barked the coach. "Gordon, don't give the play away. Shifting your feet like that makes it a cinch for the other fellow. Get your position now and hold it until the ball's passed. All right. Once more, Quarter."

The pigskin shot into his waiting hands, Gordon leaped forward, took it at a hand-pass and ran out behind his line, left half in advance, turned sharply in and set the ball down.