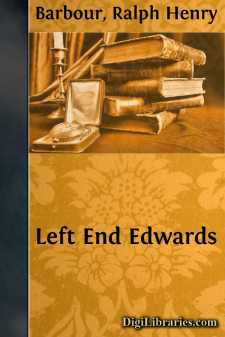 CHAPTER I FATHERS AND SONS

"Dad, what does 'Mens sana in corpore sano' mean?"

Mr. Edwards slightly lowered his Sunday paper and over the top of it frowned abstractedly at the boy on the window-seat. "Eh?" he asked. "What was that?"

"Oh!" Mr. Edwards blinked through his reading glasses and rustled the paper. Finally, "For a boy who has studied as much Latin as you have," he said disapprovingly, "the question is extraordinary, to say the least. I'd advise you to—hm—find your dictionary, Steve." And Mr. Edwards again retired from sight.

Steve, cross-legged on the broad seat that filled the library bay, a seat which commanded an uninterrupted view up and down the street, smiled into the open pamphlet he held.

"He doesn't know," he said to himself with a chuckle. "It's something about your mind and your body, though. Never mind." He idly fluttered the leaves of the pamphlet and glanced out into the street to see if any friends were in sight. But it was Sunday afternoon, and rainy, and the wide, maple-bordered street, its neat artificial stone sidewalks shimmering with moisture, was quite deserted. With a sigh Steve went back to the pamphlet. It bore the inscription on the outer cover: "Brimfield Academy," and, below, in parenthesis, "William Torrence Foundation."

"What does 'William Torrence Foundation' mean, dad?" asked the boy.

Again Mr. Edwards lowered his paper, with a sigh. "It means, as you will discover for yourself if you will take the trouble to read the catalogue, that a man named William Torrence gave the money to establish the school. Now, for goodness sake, Steve, let me read in peace for a minute!"

"Yes, sir. Thank you." Steve turned the pages, glanced again at the "View of Main Building from the Lawn" and began to read. "In 1878 William Torrence, Esq., of New York City, visited his native town of Brimfield and interested the citizens in a plan to establish a school on a large tract of land at the edge of the town which had been in the Torrence family for many generations. Two years later the school was built and, under the title of Torrence Seminary, began a successful career which has lasted for thirty-two years. Under the principalship of Dr. Andrew Morey, the institution increased rapidly in usefulness, and in 1892 it was found necessary to add two wings to the original structure at a cost of $34,000, also the gift of the founder. Dr. Morey's connection with the school ended four years later, when the services of the present head, Mr. Joshua Fernald, A.M., were secured. The death of Mr. Torrence in 1897, after a long and honoured career, removed the school's greatest friend and benefactor, but, by the terms of his will, placed it beyond the reach of want for many years. With new buildings and improvements made possible by the generous provisions of the testament the school soon took its place amongst the foremost institutions of its kind. In 1908 the charter name was changed to Brimfield Academy—William Torrence Foundation, the course was lengthened from four years to six and the present era of well-deserved prosperity was entered on....