Left at Home or, The Heart's Resting Place 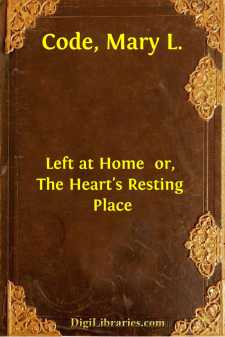 LITTLE MILDRED, OR THE GATHERED LAMB.

TOP, Mr. Arthur, if you please. You are not to go upstairs. Mistress left orders for you to stay in the library until she came down.”

So spoke the younger servant at Ashton Grange, as Arthur rushed upstairs three steps at a time.

“Why, what’s the matter? Why shouldn’t I go upstairs? Is anything the matter?”

“I don’t know, Mr. Arthur, whether there is much the matter; but I am afraid Miss Mildred is ill. The doctor is upstairs, and mistress said there is not to be a sound of noise.”

These words quite sobered Arthur, as he turned from the stairs and went into the library. It was a pleasant room at all times, but especially so on a winter’s evening, when the frosty night was shining clear and cold without. A bright fire was blazing, lighting up the crimson carpet and curtains, and sparkling on the snowy table-cover, where preparations for such a tea were made as Arthur was usually at this time prepared to appreciate. But as he sat down on the rug, and, holding his face in his two hands, gazed earnestly into the fire, he was not thinking of his hunger. A very grave expression was on his boyish face. He was thinking of what the housemaid had told him, and wishing very much to know more.

“Why, what can be the matter with baby?” he thought. “She was all right when I went out. She can’t be so very bad, I should think, all in a minute. No; I don’t believe she is. I’m hungry.”

And Arthur started up, and came nearer the table, intending to help himself to something. But then he stopped, and thought again—

Then he thought of creeping quietly upstairs, and listening outside the nursery door; and the temptation to do so was very strong; but he remembered his mother’s injunction, and sat down again on the rug. But it was very hard to wait. It would have been a great deal easier to Arthur to do almost anything else just then. One half hour and then another passed, and no sound came to break the stillness which was in the house, till Arthur’s head dropped on his hand for weariness, and in a few minutes he was fast asleep. How long he remained so he hardly knew; but he did not wake until a gentle step came on the stairs. The door was softly opened, and Arthur’s mother entered the room. She was very pale, and had a sad, sad look on her face, and just sank wearily down in an easy-chair, on the opposite side of the fireplace to her little boy, who was wide awake now.

“Oh, mother, is it true what Anna says about Mildred, that she is so very ill?” asked Arthur breathlessly. He had come nearer to his mother, and, leaning his chin on her knee, he looked eagerly up in her face.

“Yes, Arthur;” and the hand that was pressed on his forehead to stroke back his brown hair was hot and trembling....