Lectures on the French Revolution 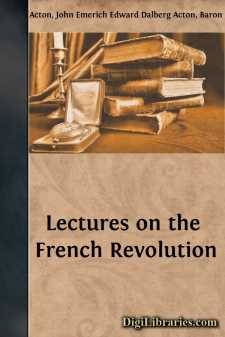 THE HERALDS OF THE REVOLUTION

The revenue of France was near twenty millions when Lewis XVI., finding it inadequate, called upon the nation for supply. In a single lifetime it rose to far more than one hundred millions, while the national income grew still more rapidly; and this increase was wrought by a class to whom the ancient monarchy denied its best rewards, and whom it deprived of power in the country they enriched. As their industry effected change in the distribution of property, and wealth ceased to be the prerogative of a few, the excluded majority perceived that their disabilities rested on no foundation of right and justice, and were unsupported by reasons of State. They proposed that the prizes in the Government, the Army, and the Church should be given to merit among the active and necessary portion of the people, and that no privilege injurious to them should be reserved for the unprofitable minority. Being nearly an hundred to one, they deemed that they were virtually the substance of the nation, and they claimed to govern themselves with a power proportioned to their numbers. They demanded that the State should be reformed, that the ruler should be their agent, not their master.

That is the French Revolution. To see that it is not a meteor from the unknown, but the product of historic influences which, by their union were efficient to destroy, and by their division powerless to construct, we must follow for a moment the procession of ideas that went before, and bind it to the law of continuity and the operation of constant forces.

If France failed where other nations have succeeded, and if the passage from the feudal and aristocratic forms of society to the industrial and democratic was attended by convulsions, the cause was not in the men of that day, but in the ground on which they stood. As long as the despotic kings were victorious abroad, they were accepted at home. The first signals of revolutionary thinking lurk dimly among the oppressed minorities during intervals of disaster. The Jansenists were loyal and patient; but their famous jurist Domat was a philosopher, and is remembered as the writer who restored the supremacy of reason in the chaotic jurisprudence of the time. He had learnt from St. Thomas, a great name in the school he belonged to, that legislation ought to be for the people and by the people, that the cashiering of bad kings may be not only a right but a duty. He insisted that law shall proceed from common sense, not from custom, and shall draw its precepts from an eternal code. The principle of the higher law signifies Revolution. No government founded on positive enactments only can stand before it, and it points the way to that system of primitive, universal, and indefeasible rights which the lawyers of the Assembly, descending from Domat, prefixed to their constitution.

Under the edict of Nantes the Protestants were decided royalists; so that, even after the Revocation, Bayle, the apostle of Toleration, retained his loyalty in exile at Rotterdam....