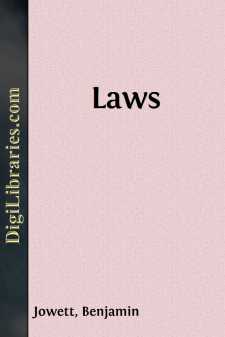 The genuineness of the Laws is sufficiently proved (1) by more than twenty citations of them in the writings of Aristotle, who was residing at Athens during the last twenty years of the life of Plato, and who, having left it after his death (B.C. 347), returned thither twelve years later (B.C. 335); (2) by the allusion of Isocrates

(Oratio ad Philippum missa, p.84: To men tais paneguresin enochlein kai pros apantas legein tous sunprechontas en autais pros oudena legein estin, all omoios oi toioutoi ton logon (sc. speeches in the assembly) akuroi tugchanousin ontes tois nomois kai tais politeiais tais upo ton sophiston gegrammenais.) —writing 346 B.C., a year after the death of Plato, and probably not more than three or four years after the composition of the Laws—who speaks of the Laws and Republics written by philosophers (upo ton sophiston); (3) by the reference (Athen.) of the comic poet Alexis, a younger contemporary of Plato (fl. B.C 356-306), to the enactment about prices, which occurs in Laws xi., viz that the same goods should not be offered at two prices on the same day

Meineke, Frag. Com. Graec.); (4) by the unanimous voice of later antiquity and the absence of any suspicion among ancient writers worth speaking of to the contrary; for it is not said of Philippus of Opus that he composed any part of the Laws, but only that he copied them out of the waxen tablets, and was thought by some to have written the Epinomis (Diog. Laert.) That the longest and one of the best writings bearing the name of Plato should be a forgery, even if its genuineness were unsupported by external testimony, would be a singular phenomenon in ancient literature; and although the critical worth of the consensus of late writers is generally not to be compared with the express testimony of contemporaries, yet a somewhat greater value may be attributed to their consent in the present instance, because the admission of the Laws is combined with doubts about the Epinomis, a spurious writing, which is a kind of epilogue to the larger work probably of a much later date. This shows that the reception of the Laws was not altogether undiscriminating.

The suspicion which has attached to the Laws of Plato in the judgment of some modern writers appears to rest partly (1) on differences in the style and form of the work, and (2) on differences of thought and opinion which they observe in them. Their suspicion is increased by the fact that these differences are accompanied by resemblances as striking to passages in other Platonic writings. They are sensible of a want of point in the dialogue and a general inferiority in the ideas, plan, manners, and style. They miss the poetical flow, the dramatic verisimilitude, the life and variety of the characters, the dialectic subtlety, the Attic purity, the luminous order, the exquisite urbanity; instead of which they find tautology, obscurity, self-sufficiency, sermonizing, rhetorical declamation, pedantry, egotism, uncouth forms of sentences, and peculiarities in the use of words and idioms....