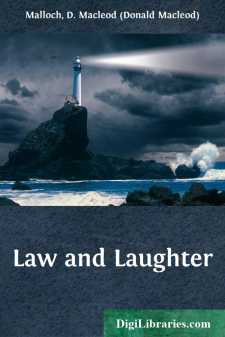 Mr. Justice Darling, whose witty remarks from the Bench are so much appreciated by his audiences in Court, and, it is rumoured, are not always received with approval by his brother judges, says, in his amusing book Scintillæ Juris:

"It is a common error to suppose that our law has no sense of humour, because for the most part the judges who expound it have none."

But law is, after all, a serious business—at any rate for the litigants—and it would appear also for the attorneys, for while witticisms of the Bench and Bar abound, very few are recorded of the attorney and his client. "Law is law" wrote the satirist who decided not to adopt it as a profession. "Law is like a country dance; people are led up and down in it till they are tired. Law is like a book of surgery—there are a great many terrible cases in it. It is also like physic—they who take least of it are best off. Law is like a homely gentlewoman—very well to follow. Law is like a scolding wife—very bad when it follows us. Law is like a new fashion—people are bewitched to get into it. It is also like bad weather—most people are glad when they get out of it."

From very early times there have appeared on the Bench expounders of the law who by the phrase "for the most part" must be acquitted of Mr. Justice Darling's charge of having no sense of humour; judges who, like himself, have lightened the otherwise dreary routine of duty by pleasantries which in no way interfered with the course of justice. One of the earliest of our witty judges, whose brilliant sayings have come down to us, was Henry VIII's Lord Chancellor, Sir Thomas More, who lost his head because he would not acknowledge his king as head of the Church. To Sir Thomas Manners, Earl of Rutland, who had made a somewhat insolent remark, the Lord Chancellor quietly replied, 'Honores mutant mores'—Honours change manners. Sir Thomas's humour was what may be called quiet, because its effect did not immediately show itself in boisterous merriment, but would undoubtedly remain long in the remembrance of those to whom it was addressed. Made with as much courtesy as irony, is it likely his keeper in the Tower would ever forget his remark? "Assure yourself I do not dislike my cheer; but whenever I do, then spare not to thrust me out of your doors." Nor did his quaint humour desert him at the scaffold: "Master Lieutenant," said he, "I pray you see me safe up; for my coming down let me shift for myself." Even with his head on the block he could not resist a humorous remark, when putting aside his beard he said to the executioner, "Wait, my good friend, till I have removed my beard, for it has never offended his highness."

Another judge of the sixteenth century, Sir Nicholas Bacon, who resembled Sir Thomas More in the gentleness of his happiest speeches, could also on occasion exhibit an unnecessary coarseness in his jocular retorts. A circuit story is told of him in which a convicted felon named Hog appealed for remission of his sentence on the ground that he was related to his lordship....