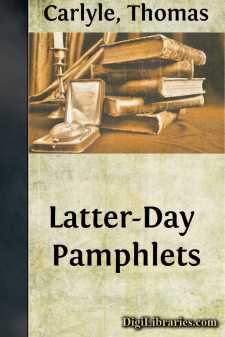 The Present Time, youngest-born of Eternity, child and heir of all the Past Times with their good and evil, and parent of all the Future, is ever a "New Era" to the thinking man; and comes with new questions and significance, however commonplace it look: to know it, and what it bids us do, is ever the sum of knowledge for all of us. This new Day, sent us out of Heaven, this also has its heavenly omens;—amid the bustling trivialities and loud empty noises, its silent monitions, which if we cannot read and obey, it will not be well with us! No;—nor is there any sin more fearfully avenged on men and Nations than that same, which indeed includes and presupposes all manner of sins: the sin which our old pious fathers called "judicial blindness;"—which we, with our light habits, may still call misinterpretation of the Time that now is; disloyalty to its real meanings and monitions, stupid disregard of these, stupid adherence active or passive to the counterfeits and mere current semblances of these. This is true of all times and days.

But in the days that are now passing over us, even fools are arrested to ask the meaning of them; few of the generations of men have seen more impressive days. Days of endless calamity, disruption, dislocation, confusion worse confounded: if they are not days of endless hope too, then they are days of utter despair. For it is not a small hope that will suffice, the ruin being clearly, either in action or in prospect, universal. There must be a new world, if there is to be any world at all! That human things in our Europe can ever return to the old sorry routine, and proceed with any steadiness or continuance there; this small hope is not now a tenable one. These days of universal death must be days of universal new-birth, if the ruin is not to be total and final! It is a Time to make the dullest man consider; and ask himself, Whence he came? Whither he is bound?—A veritable "New Era," to the foolish as well as to the wise.

Not long ago, the world saw, with thoughtless joy which might have been very thoughtful joy, a real miracle not heretofore considered possible or conceivable in the world,—a Reforming Pope. A simple pious creature, a good country-priest, invested unexpectedly with the tiara, takes up the New Testament, declares that this henceforth shall be his rule of governing. No more finesse, chicanery, hypocrisy, or false or foul dealing of any kind: God's truth shall be spoken, God's justice shall be done, on the throne called of St. Peter: an honest Pope, Papa, or Father of Christendom, shall preside there. And such a throne of St. Peter; and such a Christendom, for an honest Papa to preside in! The European populations everywhere hailed the omen; with shouting and rejoicing leading articles and tar-barrels; thinking people listened with astonishment,—not with sorrow if they were faithful or wise; with awe rather as at the heralding of death, and with a joy as of victory beyond death! Something pious, grand and as if awful in that joy, revealing once more the Presence of a Divine Justice in this world....