Latin Pronunciation A Short Exposition of the Roman Method 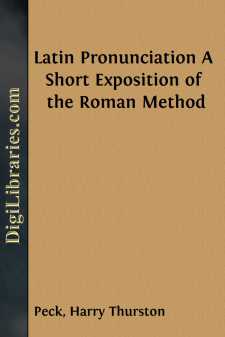 THIS short manual is primarily intended for those who, being interested in the study of Latin, have accepted the Roman method of pronunciation upon the authority of the Grammars, but have either not been able to command the time to make themselves familiar with the arguments upon which this system is based, or have been repelled by the technicalities employed in treating the question from the standpoint of the specialist. It is believed that the following pages will be found to give in simple form the main facts bearing upon this interesting question; and that nothing has been introduced that is either unnecessary or obscure. For those who may wish to pursue their investigations farther after mastering these facts, a bibliography of the subject is given at the end.

The Roman method of pronouncing Latin has now received the approval of all Latinists of authority in Europe and America, as giving substantially the pronunciation employed by educated Romans of the Augustan Age. It has been formally adopted at our leading Universities. The most recent Grammars of the language recognize no other method. Thus, one great reproach to classical scholarship seems likely to be soon removed, and one universal pronunciation of the noblest of the ancient languages to receive general acceptation. This little book will more than accomplish its object if it shall have aided ever so slightly in discrediting the barbarisms of a method which, to use the expression of a distinguished scholar, "ought long since to have followed the Ptolemaic system of astronomy into the limbo of unscientific curiosities."

[1]. It is natural that the Roman system should make its way more rapidly into use in this country than in Europe, not because Americans are more given to experiments, but because here in the United States the inconveniences of having no standard system have been more sharply felt. New England being wholly settled from Old England, long continued the English system of pronouncing Latin. In the Middle States, the Germans and Dutch introduced their own methods; in the South and West, the French pronunciation came in quite frequently; and all over the Union, the Catholic clergy in their schools and colleges have propagated the traditional usage of their Church. Hence a Babel of pronunciations and systems existing and practised side by side, in a picturesque confusion such as no European country ever knew; and hence the general willingness to accept a single method, especially one that is based upon historic truth.

SOURCES OF OUR INFORMATION.

A QUESTION of much interest to the student of Latin, and one that does not always receive a satisfactory answer, relates to the sources of our information.

What knowledge have we of how the Romans pronounced their own language nineteen hundred years ago? How is it possible after so long an interval to reconstruct the laws of a pronunciation which prevailed at a given period of the remote past?

Briefly summarized, the sources of our information are six in number....