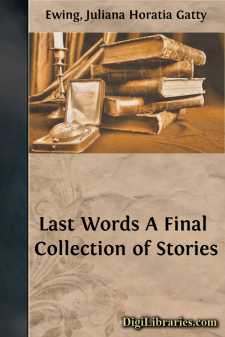 Mother is always trying to make us love our neighbors as ourselves.

She does so despise us for greediness, or grudging, or snatching, or not sharing what we have got, or taking the best and leaving the rest, or helping ourselves first, or pushing forward, or praising Number One, or being Dogs in the Manger, or anything selfish. And we cannot bear her to despise us!

We despise being selfish, too; but very often we forget. Besides, it is sometimes rather difficult to love your neighbor as yourself when you want a thing very much; and Arthur says he believes it is particularly difficult if it is your next-door-neighbor, and that that is why Father and the Old Squire quarrelled about the footpath through Mary's Meadow.

The Old Squire is not really his name, but that is what people call him. He is very rich. His place comes next to ours, and it is much bigger, and he has quantities of fields, and Father has only got a few; but there are two fields beyond Mary's Meadow which belong to Father, though the Old Squire wanted to buy them. Father would not sell them, and he says he has a right of way through Mary's Meadow to go to his fields, but the Old Squire says he has nothing of the kind, and that is what they quarrelled about.

Arthur says if you quarrel, and are too grown-up to punch each other's heads, you go to law; and if going to law doesn't make it up, you appeal. They went to law, I know, for Mother cried about it; and I suppose it did not make it up, for the Old Squire appealed.

After that he used to ride about all day on his grey horse, with Saxon, his yellow bull-dog, following him, to see that we did not trespass on Mary's Meadow. I think he thought that if we children were there, Saxon would frighten us, for I do not suppose he knew that we knew him. But Saxon used often to come with the Old Squire's Scotch Gardener to see our gardener, and when they were looking at the wall fruit, Saxon used to come snuffing after us.

He is the nicest dog I know. He looks very savage, but he is only very funny. His lower jaw sticks out, which makes him grin, and some people think he is gnashing his teeth with rage. We think it looks as if he were laughing—like Mother Hubbard's dog, when she brought home his coffin, and he wasn't dead—but it really is only the shape of his jaw. I loved Saxon the first day I saw him, and he likes me, and licks my face. But what he likes best of all are Bath Oliver Biscuits.

One day the Scotch Gardener saw me feeding him, and he pulled his red beard, and said "Ye do weel to mak hay while the sun shines, Saxon, my man. There's sma' sight o' young leddies and sweet cakes at hame for ye!" And Saxon grinned, and wagged his tail, and the Scotch Gardener touched his hat to me, and took him away.

The Old Squire's Weeding Woman is our nursery-maid's aunt. She is not very old, but she looks so, because she has lost her teeth, and is bent nearly double. She wears a large hood, and carries a big basket, which she puts down outside the nursery door when she comes to tea with Bessy. If it is a fine afternoon, and we are gardening, she lets us borrow the basket, and then we play at being weeding women in each other's gardens.

She tells Bessy about the Old Squire. She says—"He do be a real old skinflint, the Old Zquire a be!" But she thinks it—"zim as if 'twas having ne'er a wife nor child for to keep the natur in 'un, so his heart do zim to shrivel, like they walnuts Butler tells us of as a zets down for desart. The Old Zquire he mostly eats ne'er a one now's teeth be so bad. But a counts them every night when's desart's done. And a keeps 'em till the karnels be mowldy, and a keeps 'em till they be dry, and a keeps 'em till they be dust; and when the karnels is dust, a cracks aal the lot of 'em when desart's done, zo's no one mayn't have no good of they walnuts, since they be no good to he."

Arthur can imitate the Weeding Woman exactly, and he can imitate the Scotch Gardener, too. Chris (that is Christopher, our youngest brother), is very fond of "The Zquire and the Walnuts." He gets nuts, or anything, like shells or bits of flower-pots, that will break, and something to hit with, and when Arthur comes to "The karnels is dust," Chris smashes everything before him, shouting, "A cracks aal the lot of 'em" and then he throws the bits all over the place, with "They be no good to he."

Father laughed very much when he heard Arthur do the Weeding Woman, and Mother could not help laughing, too; but she did not like it, because she does not like us to repeat servants' gossip....