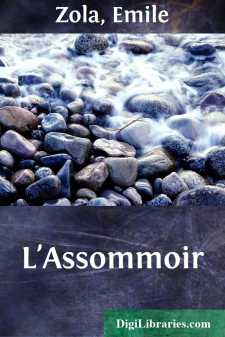 Gervaise had waited up for Lantier until two in the morning. Then, shivering from having remained in a thin loose jacket, exposed to the fresh air at the window, she had thrown herself across the bed, drowsy, feverish, and her cheeks bathed in tears.

For a week past, on leaving the "Two-Headed Calf," where they took their meals, he had sent her home with the children and never reappeared himself till late at night, alleging that he had been in search of work. That evening, while watching for his return, she thought she had seen him enter the dancing-hall of the "Grand-Balcony," the ten blazing windows of which lighted up with the glare of a conflagration the dark expanse of the exterior Boulevards; and five or six paces behind him, she had caught sight of little Adele, a burnisher, who dined at the same restaurant, swinging her hands, as if she had just quitted his arm so as not to pass together under the dazzling light of the globes at the door.

When, towards five o'clock, Gervaise awoke, stiff and sore, she broke forth into sobs. Lantier had not returned. For the first time he had slept away from home. She remained seated on the edge of the bed, under the strip of faded chintz, which hung from the rod fastened to the ceiling by a piece of string. And slowly, with her eyes veiled by tears, she glanced round the wretched lodging, furnished with a walnut chest of drawers, minus one drawer, three rush-bottomed chairs, and a little greasy table, on which stood a broken water-jug. There had been added, for the children, an iron bedstead, which prevented any one getting to the chest of drawers, and filled two-thirds of the room. Gervaise's and Lantier's trunk, wide open, in one corner, displayed its emptiness, and a man's old hat right at the bottom almost buried beneath some dirty shirts and socks; whilst, against the walls, above the articles of furniture, hung a shawl full of holes, and a pair of trousers begrimed with mud, the last rags which the dealers in second-hand clothes declined to buy. In the centre of the mantel-piece, lying between two odd zinc candle-sticks, was a bundle of pink pawn-tickets. It was the best room of the hotel, the first floor room, looking on to the Boulevard.

The two children were sleeping side by side, with their heads on the same pillow. Claude, aged eight years, was breathing quietly, with his little hands thrown outside the coverlet; while Etienne, only four years old, was smiling, with one arm round his brother's neck! And bare-footed, without thinking to again put on the old shoes that had fallen on the floor, she resumed her position at the window, her eyes searching the pavements in the distance.

The hotel was situated on the Boulevard de la Chapelle, to the left of the Barriere Poissonniere. It was a building of two stories high, painted a red, of the color of wine dregs, up to the second floor, and with shutters all rotted by the rain. Over a lamp with starred panes of glass, one could manage to read, between the two windows, the words, "Hotel Boncoeur, kept by Marsoullier," painted in big yellow letters, several pieces of which the moldering of the plaster had carried away....