Language An Introduction to the Study of Speech 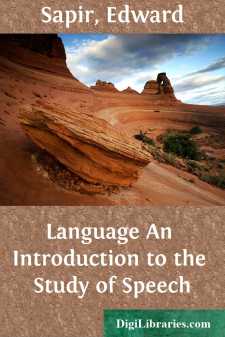 Speech is so familiar a feature of daily life that we rarely pause to define it. It seems as natural to man as walking, and only less so than breathing. Yet it needs but a moment’s reflection to convince us that this naturalness of speech is but an illusory feeling. The process of acquiring speech is, in sober fact, an utterly different sort of thing from the process of learning to walk. In the case of the latter function, culture, in other words, the traditional body of social usage, is not seriously brought into play. The child is individually equipped, by the complex set of factors that we term biological heredity, to make all the needed muscular and nervous adjustments that result in walking. Indeed, the very conformation of these muscles and of the appropriate parts of the nervous system may be said to be primarily adapted to the movements made in walking and in similar activities. In a very real sense the normal human being is predestined to walk, not because his elders will assist him to learn the art, but because his organism is prepared from birth, or even from the moment of conception, to take on all those expenditures of nervous energy and all those muscular adaptations that result in walking. To put it concisely, walking is an inherent, biological function of man.

Not so language. It is of course true that in a certain sense the individual is predestined to talk, but that is due entirely to the circumstance that he is born not merely in nature, but in the lap of a society that is certain, reasonably certain, to lead him to its traditions. Eliminate society and there is every reason to believe that he will learn to walk, if, indeed, he survives at all. But it is just as certain that he will never learn to talk, that is, to communicate ideas according to the traditional system of a particular society. Or, again, remove the new-born individual from the social environment into which he has come and transplant him to an utterly alien one. He will develop the art of walking in his new environment very much as he would have developed it in the old. But his speech will be completely at variance with the speech of his native environment. Walking, then, is a general human activity that varies only within circumscribed limits as we pass from individual to individual. Its variability is involuntary and purposeless. Speech is a human activity that varies without assignable limit as we pass from social group to social group, because it is a purely historical heritage of the group, the product of long-continued social usage. It varies as all creative effort varies—not as consciously, perhaps, but none the less as truly as do the religions, the beliefs, the customs, and the arts of different peoples. Walking is an organic, an instinctive, function (not, of course, itself an instinct); speech is a non-instinctive, acquired, “cultural” function.

There is one fact that has frequently tended to prevent the recognition of language as a merely conventional system of sound symbols, that has seduced the popular mind into attributing to it an instinctive basis that it does not really possess....