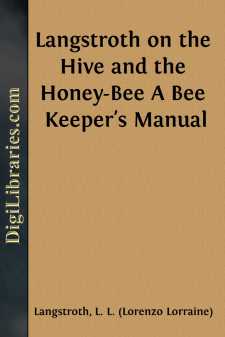 Each comb in this hive is attached to a separate, movable frame, and in less than five minutes they may all be taken out, without cutting or injuring them, or at all enraging the bees. Weak stocks may be quickly strengthened by helping them to honey and maturing brood from stronger ones; queenless colonies may be rescued from certain ruin by supplying them with the means of obtaining another queen; and the ravages of the moth effectually prevented, as at any time the hive may be readily examined and all the worms, &c., removed from the combs. New colonies may be formed in less time than is usually required to hive a natural swarm; or the hive may be used as a non-swarmer, or managed on the common swarming plan. The surplus honey may be taken from the interior of the hive on the frames or in upper boxes or glasses, in the most convenient, beautiful and saleable forms. Colonies may be safely transferred from any other hive to this, at any season of the year, from April to October, as the brood, combs, honey and all the contents of the hive are transferred with them, and securely fastened in the frames. That the combs can always be removed from this hive with ease and safety, and that the new system, by giving the perfect control over all the combs, effects a complete revolution in practical bee-keeping, the subscriber prefers to prove rather than assert. Practical Apiarians and all who wish to purchase rights and hives, are invited to visit his Apiary, where combs, honey and bees will be taken from the hives; colonies which may be brought to him for that purpose, transferred from any old hive; queens, and the whole process of rearing them constantly exhibited; new colonies formed, and all processes connected with the practical management of an Apiary fully illustrated and explained.

Those who have any considerable number of bees, will find it to their interest to have at least one movable comb-hive in their Apiary, from which they may, in a few minutes, supply any colony which has lost its queen, with the means of rearing another.

The hive and right will be furnished on the following terms. For an individual or farm right, five dollars. This will entitle the purchaser to use and construct for his own use on his own premises, as many hives as he chooses. The hives are manufactured by machinery, and can probably be delivered, freight included, at any Railroad Station in New England, or New York, cheaper than they could be made in small quantities on the spot. On receipt of a hive, the purchaser can decide for himself, whether he prefers to make them, or to order them of the Patentee. For one dollar, postage paid, the book will be sent free by mail. On receipt of ten dollars, a beautiful hive showing all the combs, (with glass on four sides,) will be sent with right, freight paid to any railroad station in New England or New York: a right and hive which will accommodate two colonies, with glass on each side, for twelve dollars; for seven dollars, a right and a well made hive that any one can construct who can handle the simplest tools....