Lameness of the Horse Veterinary Practitioners' Series, No. 1 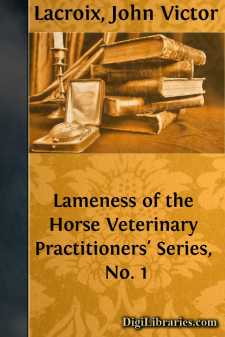 SECTION I. ETIOLOGY AND OCCURRENCE.

In discussions of pathological conditions contributing to lameness in the horse, cause is generally classified under two heads—predisposing and exciting. It becomes necessary, however, to adopt a more general and comprehensive method of classification, herein, which will enable the reader to obtain a better conception of the subject and to more clearly associate the parts so grouped descriptively.

Though predisposing factors, such as faulty conformation, are often to be reckoned with, exciting causes predominate more frequently in any given number of cases. The noble tendency of the horse to serve its master under the stress of pain, even to the point of complete exhaustion and sudden death, should win for these willing servants a deeper consideration of their welfare. Too frequently are their manifestations of discomfort allowed to pass unheeded by careless, incompetent drivers lacking in a sense of compassion. Symptoms of malaise should never be ignored in any case; the humane and economic features should be realized by any owner of animals.

In the consideration of group causes, lameness may be said to originate from affections of bones, ligaments, thecae and bursae, muscles and tendons, nerves, lymph vessels and glands, and blood vessels, and may also result from an involvement of one or several of the aforementioned tissues, caused by rheumatism. Further, affections of the feet merit separate consideration, and, finally, a miscellaneous grouping of various dissimilar ailments, which for the most part, do not directly involve the locomotory apparatus but do, by their nature, impede normal movement.

The bony column serving as the framework and support of the legs, probably constitutes the most vital element having to do with weight bearing and locomotion, and therefore during the acute and painful stage of bone affections, the pain becomes more intense in the process and pressure of standing than when the member is swung or advanced.

Certain bones are so well protected by muscular structures that they are not frequently injured except as a result of violence which may produce fracture. However, there are certain bones which receive the constant shock of concussion when the animal is subjected to daily, rapid work on hard road surfaces. Splints, ringbones and spavins are the most general examples produced by these conditions.

Varying pathological developments often result from concussion, contusion or other violent shocks to the bony structures. In such cases there either follows a simple periostitis which may resolve spontaneously with no obvious outward symptom, or osteitis, which may occur with tissue changes, as in exostosis; or the case may produce any degree of reaction between these two possible extremes.

Certain bone affections, such as osteomalacia or osteoporosis, are in the main, responsible for distortions and morphological changes of bone, causing lameness, permanent blemish and even resulting in death of the affected animal....