Lamarck, the Founder of Evolution His Life and Work

by A. S. (Alpheus Spring) Packard 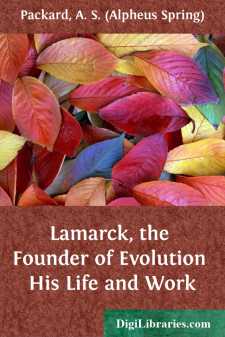 Although it is now a century since Lamarck published the germs of his theory, it is perhaps only within the past fifty years that the scientific world and the general public have become familiar with the name of Lamarck and of Lamarckism.

The rise and rehabilitation of the Lamarckian theory of organic evolution, so that it has become a rival of Darwinism; the prevalence of these views in the United States, Germany, England, and especially in France, where its author is justly regarded as the real founder of organic evolution, has invested his name with a new interest, and led to a desire to learn some of the details of his life and work, and of his theory as he unfolded it in 1800 and subsequent years, and finally expounded it in 1809. The time seems ripe, therefore, for a more extended sketch of Lamarck and his theory, as well as of his work as a philosophical biologist, than has yet appeared.

But the seeker after the details of his life is baffled by the general ignorance about the man—his antecedents, his parentage, the date of his birth, his early training and education, his work as a professor in the Jardin des Plantes, the house he lived in, the place of his burial, and his relations to his scientific contemporaries.

Except the éloges of Geoffroy St. Hilaire and Cuvier, and the brief notices of Martins, Duval, Bourguignat, and Bourguin, there is no special biography, however brief, except a brochure of thirty-one pages, reprinted from a few scattered articles by the distinguished anthropologist, M. Gabriel de Mortillet, in the fourth and last volume of a little-known journal, l’Homme, entitled Lamarck. Par un Groupe de Transformistes, ses Disciples, Paris, 1887. This exceedingly rare pamphlet was written by the late M. Gabriel de Mortillet, with the assistance of Philippe Salmon and Dr. A. Mondière, who with others, under the leadership of Paul Nicole, met in 1884 and formed a Réunion Lamarck and a Dîner Lamarck, to maintain and perpetuate the memory of the great French transformist. Owing to their efforts, the exact date of Lamarck’s birth, the house in which he lived during his lifetime at Paris, and all that we shall ever know of his place of burial have been established. It is a lasting shame that his remains were not laid in a grave, but were allowed to be put into a trench, with no headstone to mark the site, on one side of a row of graves of others better cared for, from which trench his bones, with those of others unknown and neglected, were exhumed and thrown into the catacombs of Paris. Lamarck left behind him no letters or manuscripts; nothing could be ascertained regarding the dates of his marriages, the names of his wives or of all his children. Of his descendants but one is known to be living, an officer in the army. But his aims in life, his undying love of science, his noble character and generous disposition are constantly revealed in his writings.

The name of Lamarck has been familiar to me from my youth up. When a boy, I used to arrange my collection of shells by the Lamarckian system, which had replaced the old Linnean classification. For over thirty years the Lamarckian factors of evolution have seemed to me to afford the foundation on which natural selection rests, to be the primary and efficient causes of organic change, and thus to account for the origin of variations, which Darwin himself assumed as the starting point or basis of his selection theory. It is not lessening the value of Darwin’s labors, to recognize the originality of Lamarck’s views, the vigor with which he asserted their truth, and the heroic manner in which, against adverse and contemptuous criticism, to his dying day he clung to them.

During a residence in Paris in the spring and summer of 1899, I spent my leisure hours in gathering material for this biography. I visited the place of his birth—the little hamlet of Bazentin, near Amiens—and, thanks to the kindness of the schoolmaster of that village, M. Duval, was shown the house where Lamarck was born, the records in the old parish register at the mairie of the birth of the father of Lamarck and of Lamarck himself. The Jesuit Seminary at Amiens was also visited, in order to obtain traces of his student life there, though the search was unsuccessful....